Nodevember 2019
Art events such as Nodevember are really hard with my job - it's basically impossible to find the time to make a piece of art every day for a month. But that doesn't stop me trying! This year the first week of Nodevember happened to collide with consolidation week (reading week in departments where the students actually read), which meant I had a bit of time - ended up with 6 attempts covering the first 7 days (the following days I started, but ran out of time every day, so eventually stopped trying).

First day was a Friday and I was simply too tired, so I merged the first two days (lava and clouds) into a single image made on the Saturday. The volcano and lava are a single plane, heavily displaced with many, many nodes, and then the clouds are a single volumetric cube. Obviously very stylised, but I do like the energy of this one! 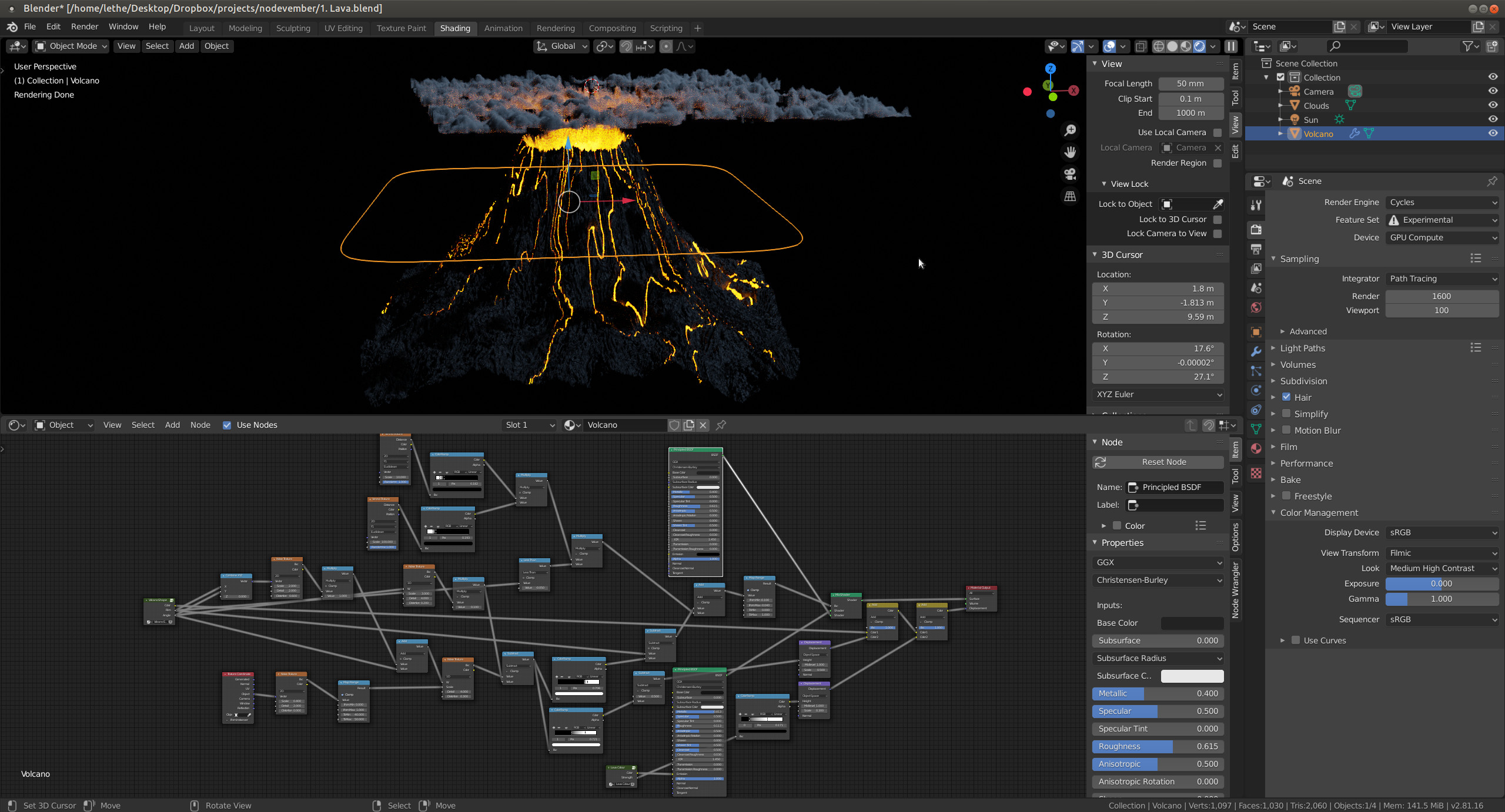 Day three and the theme was lightning, which somehow got translated into a cross between a 50s sci-fi book cover and an 80s hyperspace sequence. It was also a Sunday, so I had a little more time to go nuts. Quite a few objects in this one, but they are all primitives, so still within my interpretation of the rules. The stars were fun - I used white noise to effectively integrate over time to create the motion blur manually in the shader! This one is at the time of writing the background on my laptop - it's just so silly:-) 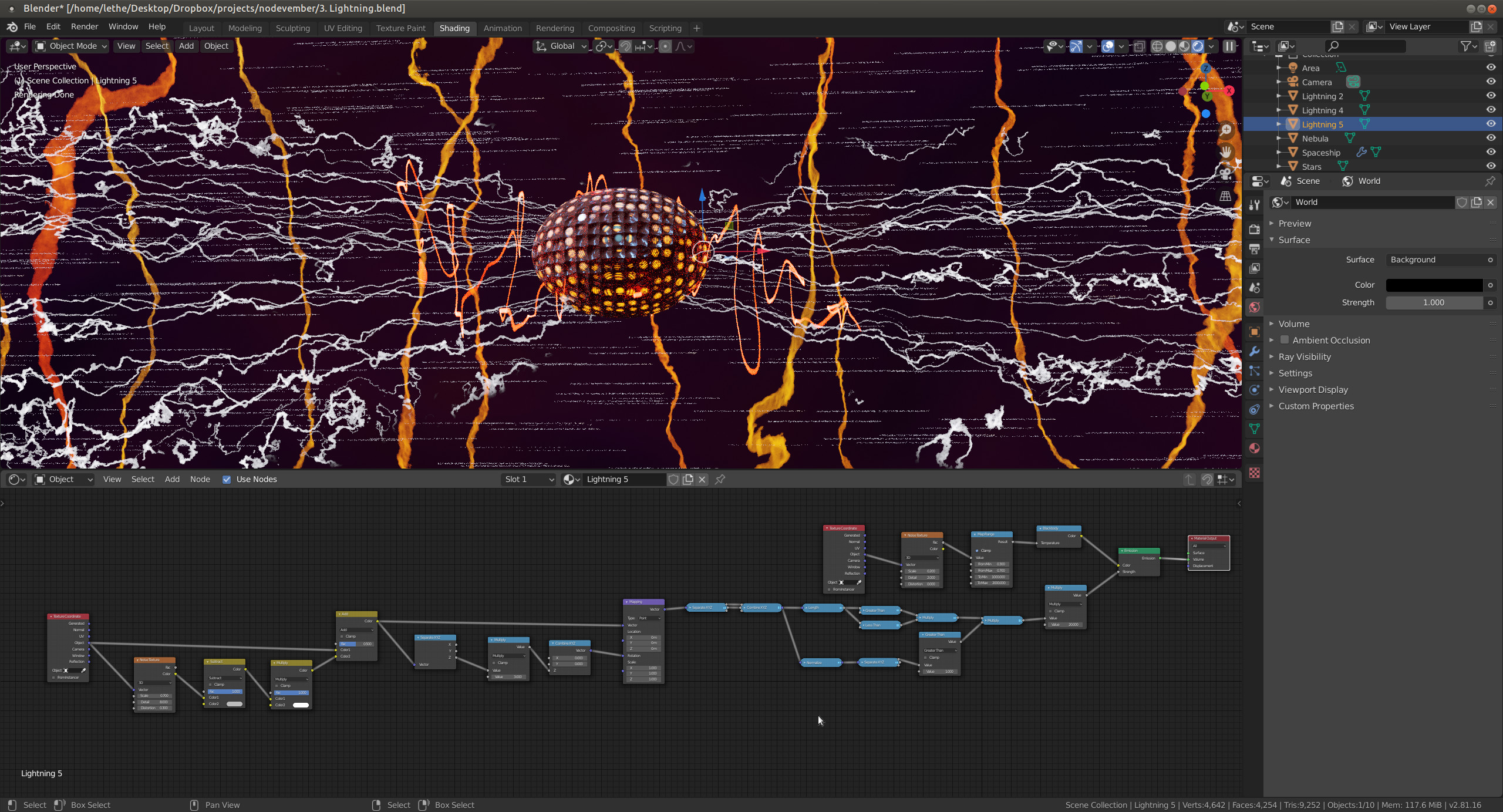 Having made a traditional tornado for the theme of the same name I concluded that was super boring. What I then tried to do is to create eyeballs, floating in the tornado, but the effect doesn't really work when it's entirely volumetric (one cube!). An idea I would like to revisit and do properly when I have the time, with bloody nerve endings forming streaks... 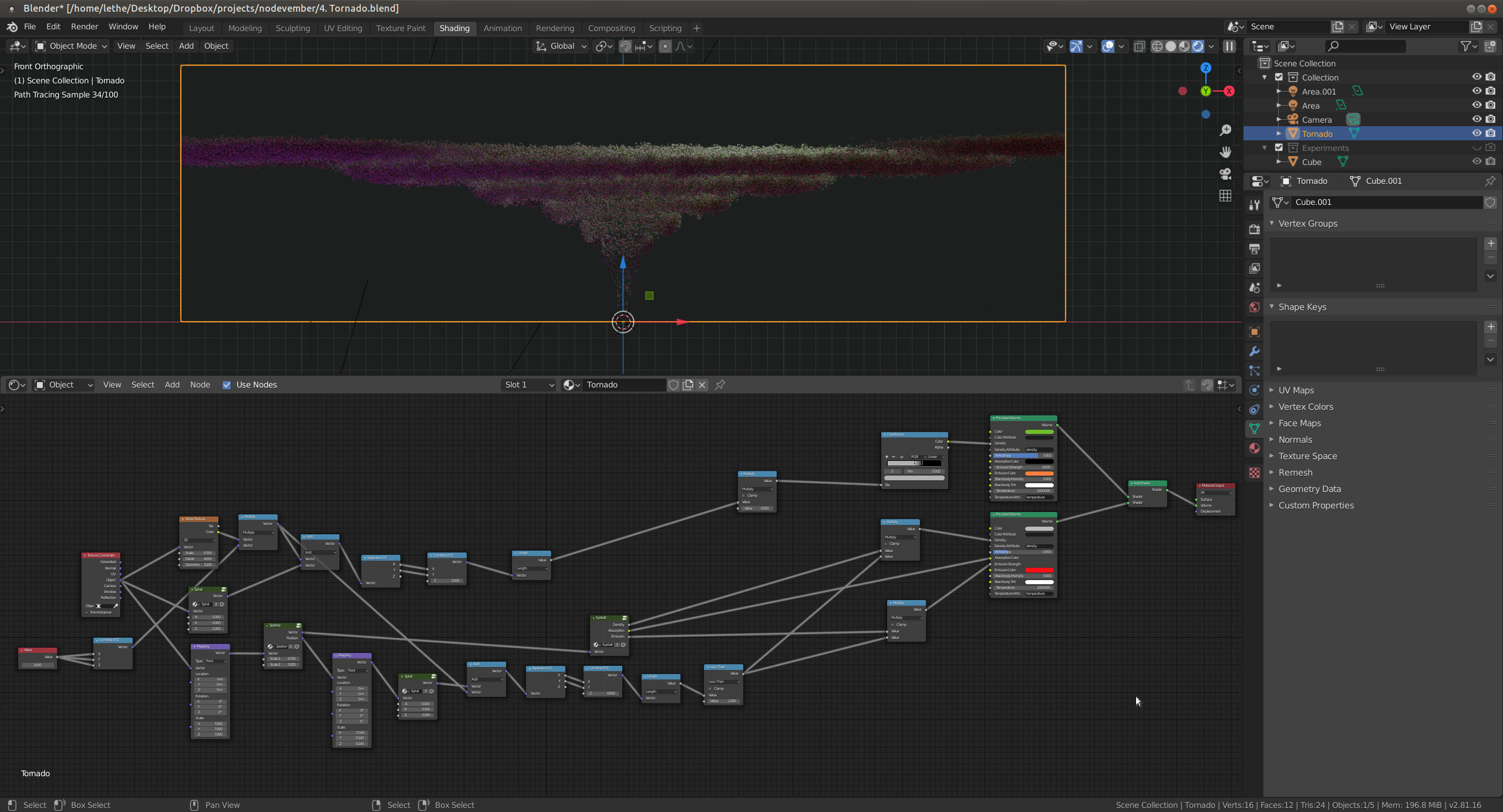 I think day five, snow, was most popular tweet. Just a happy, demonic snowball that wants to eat your eyeballs and contribute them to the tornado. 90% of this is just knowing the ingredients to create a good snow shader however, so not technically challenging at all really. 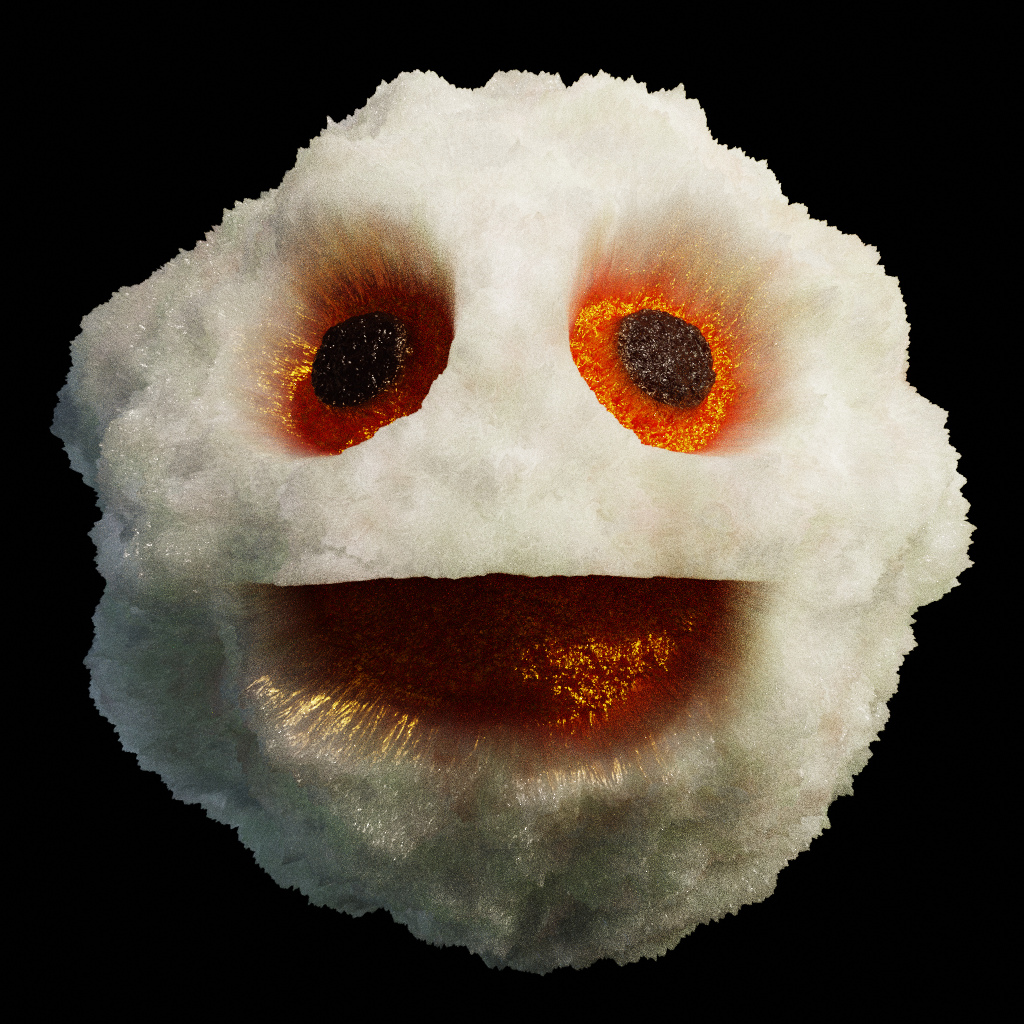 For the theme of reptile I bit off more than I could chew - a landscape plus dirigibles where everything is made out of lizard! Just didn't work in truth, and ended up looking like some kind of 90s early psychedelic CG art. 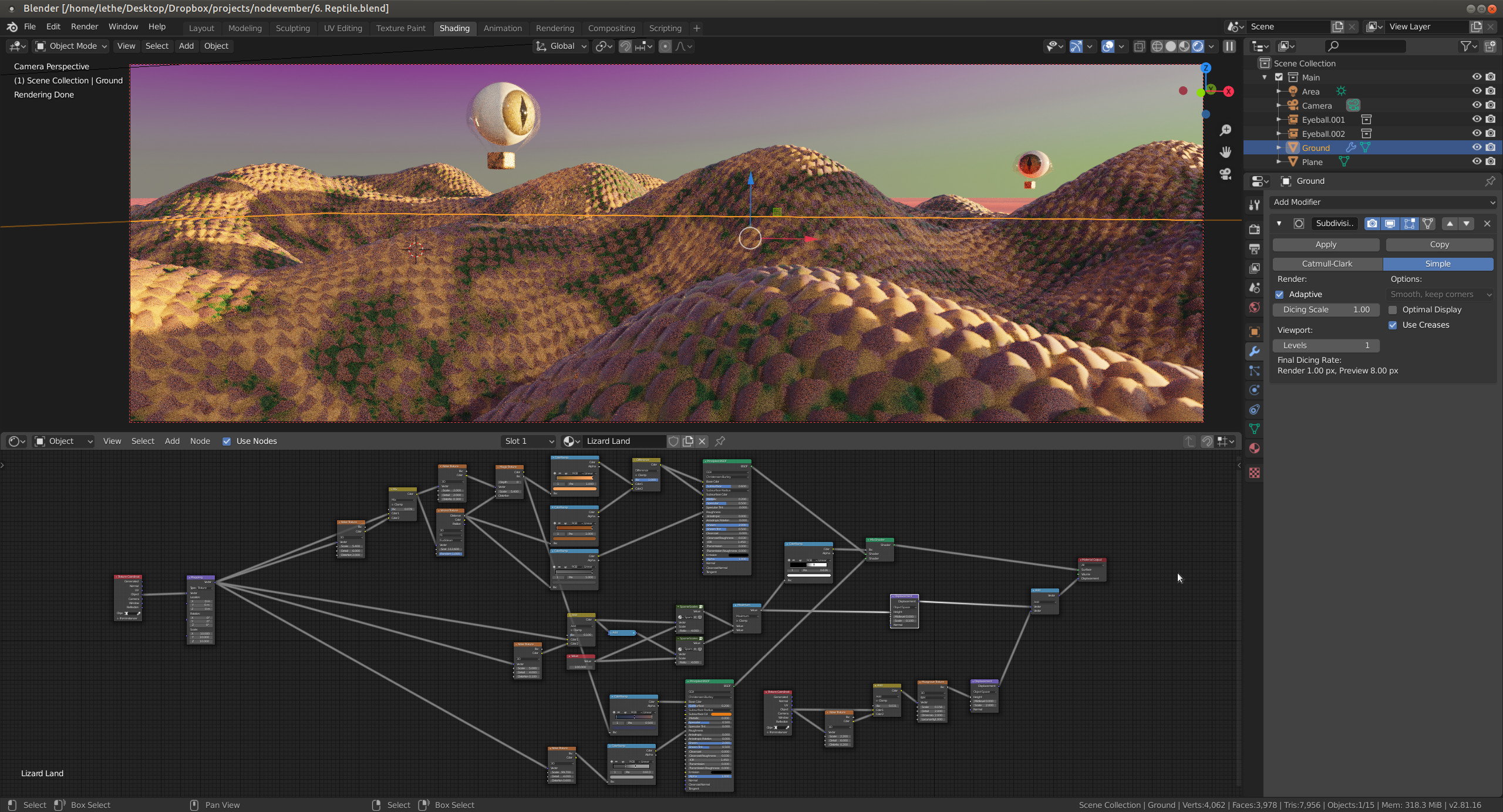 It took some serious thought to figure out how to make moss, the theme for day seven, interesting. Adding bloody teeth, to imply some pretty horrific carnivorous moss, seemed the perfect solution, but I just couldn't execute it in the time available. Truth is if I hadn't told you what it is you probably wouldn't figure it out. But it's such an insane idea I feel I should return to it when I can find the time and do it justice. Technically quite a lot is going on: Particle system is distributing a bunch of primitive that are then used to make the many parts with heavy displacement (the teeth and their stems are just cubes for instance, before the nodes deform them) 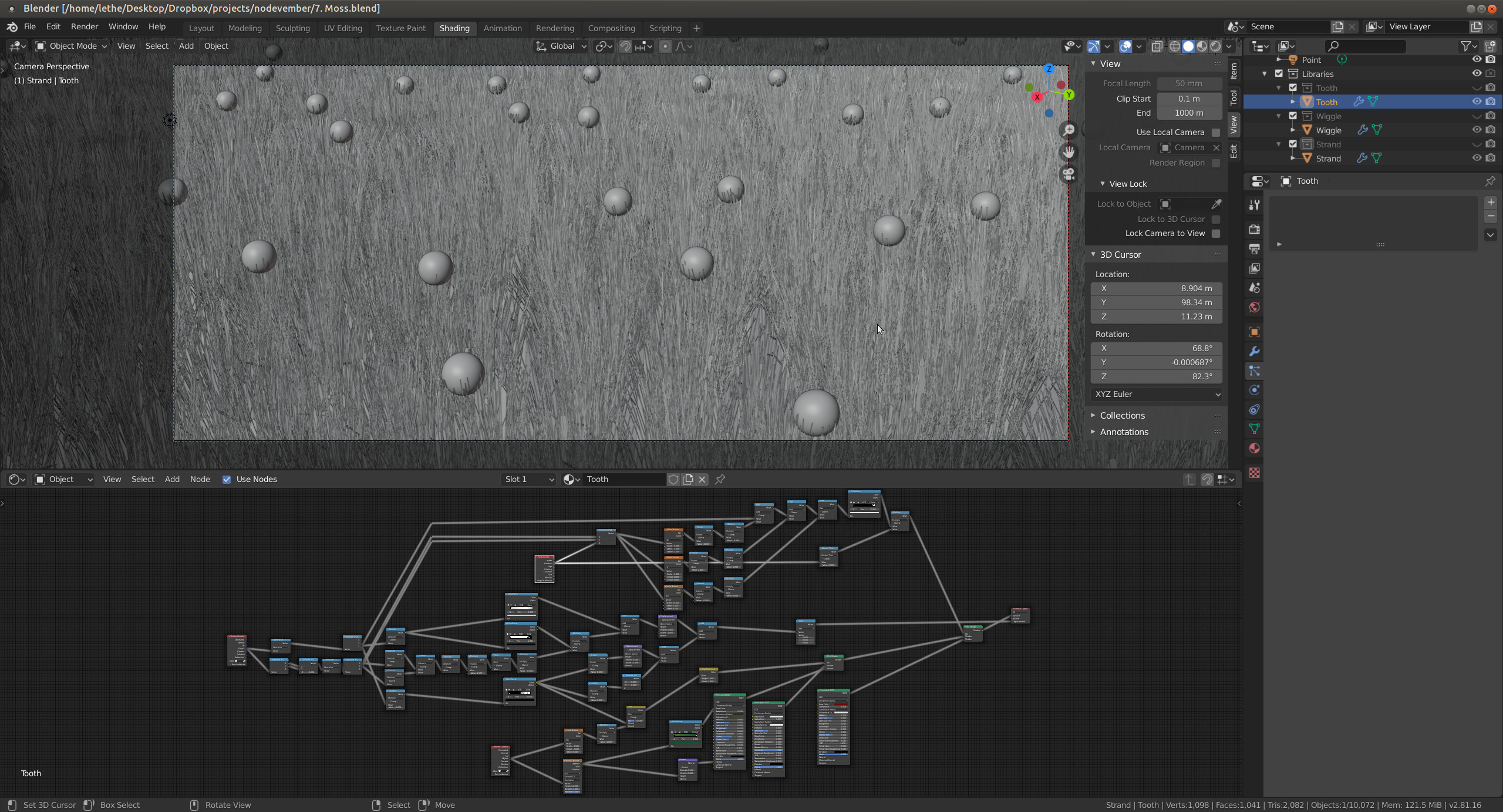