Linking & Overrides
This year, presumably because lock down has made us lose what little sanity we had left, 3Dami was run online. At the time of writing only one team has gone through, with two more starting tomorrow, and while definitely not as smooth/educational/fun as in person it still worked! You can watch their film now if you want, Out of Time

This trip down the rabbit hole was combined with us switching from Blender 2.79 last year to 2.83 this year, breaking all of our current Linking tutorials. Even the name has changed: proxies to overrides! Nothing like making a hard thing harder:-/ For that reason I had to make a new tutorial video, which has been shared on YouTube and made public for convenience:


This post isn't so much about that as about the associated tutorial. Previously, the tutorial was an almost finished film, as in everything except the shots. The hope was that this example of where the students are going would give them some clarity. And possibly a less than subtle hint that things are much easier when it's neat! Bit of early practise at animation as well (this film has never been finished; it's on my todo list but looks quite dated these days, as it precedes the principled shader).

This year we needed a new one. There simply wasn't time to make a new film from scratch (Universities in the UK have gone super-hyper-pear shaped as a result of coronavirus. They were just pear shaped before.), so instead I proposed a dance off: Each student animates one character dancing for a few seconds. They have a choice of characters and sets, all laid out as a proper film, so while there is no script they still get to see where they are going. But this meant I could stitch the whole thing together from assets we already had. Typically some of our weirder assets, as I shall now demonstrate...

Firstly, here is a car park full of parked caterpillars:

The caterpillar was created at an earlier event, and quite easy to convert to Eevee. And everyone has a car park set just lying around. Obviously (this one is shaped like a brain, to represent certain dysfunctional politicians, as a reference to the research of Bob Altemeyer. Mad idea for a short film that grew too big, but not before I had a 16 storey car park!).


Obviously the caterpillar character needed a giant ant to ride around on:

Ant is from an earlier project involving a UFO and was again quite easy to convert to Eevee. Main issue was simplifying it so it was suitable for student computers: The hair system is really fussy about disconnecting and then reconnecting to a lower polygon mesh.


Snot was an old character, an experiment in deforming eyeballs. I remade it for this tutorial, as it's quite a simple thing to redo from scratch. Also, only one eyeball as two caused issues:

The warehouse was also made from scratch, in parallel to creating the Linking & Overrides tutorial above as I needed a set that demonstrated everything I wanted to show.


Normally, 3Dami runs at UCL, and it should be of no surprise that we have a 3D model of the computer room we use. A bit of clean up and it was ready:

The eye stalk thing is just a silly experiment that I repurposed, much in the same vein as snot. No need to remake this one however as it was already prepared for Blender 2.8x and Eevee. Did need some sculpting to not be problematic however, as the original is... somewhat more horrifying.


The intro for the 3Dami premieres has been making use of a 3D model of a cinema for some years - that was obviously converted (see next). But I needed an image for the screen, which ended up as this:

Might as well acknowledge the moment by riffing off of that meme, screaming be damned! Incidentally, this is a set the students can dance in, and it is setup in the most absurd way possible: 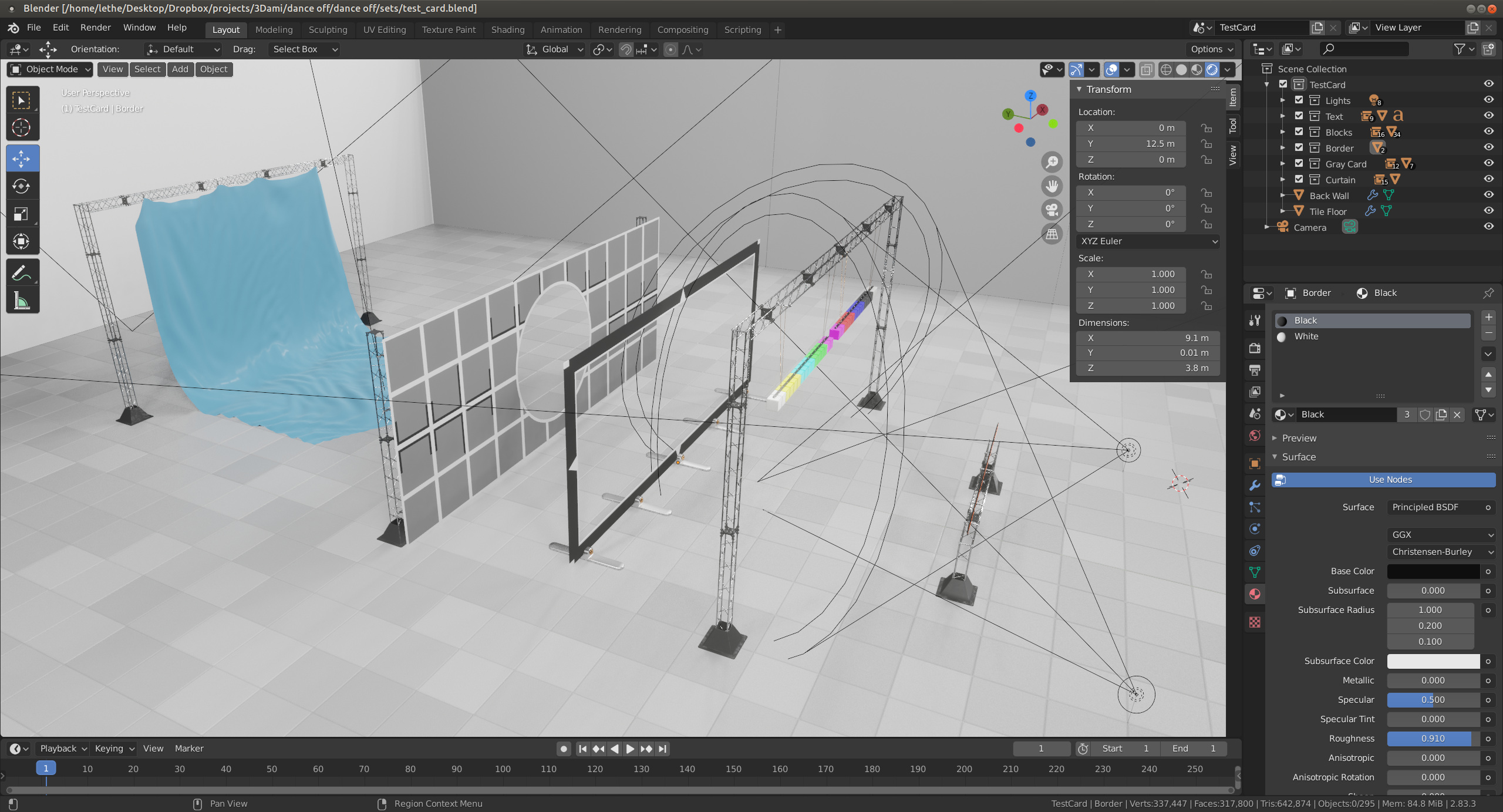 Finally, here is a snail looking smug in the cinema:

The cinema was made by me one Sunday afternoon many years ago for that years premiere. Needed to be converted from Cycles, but was quite quick all things considered. The snail was made by one of the students who has now graduated to be a helper. It's meant to be me. Guess this is the closest I'll get to running a premiere this year;-)
Copyright Tom SF Haines