Title Sheets 2020
On account of covid19 we had to film all of our lectures this year. The workload of the first semester is insane at the best of times, but filming everything takes a lot longer than just rocking up to the lecture theatre and speaking for 50 minutes (about 4x as long is my estimate, and unlike most lecturers I have extensive experience with filming stuff). One of the ways I deal with stress is to art, and so I had a little bit of fun creating title sheets for my many, many lectures (It's easier to justify wasting time, when you need to spend every waking hour working, if you can claim it contributes. As messed up as that may be.) They are highly uneven of course, as some were done in 20 minutes, and others I spent longer on, in some cases far longer than I should have (getting up at 6am to upload your lectures before the students pop online and make everything unusable, just because you got a little carried away, is ridiculous, but at least it's my fault.). Anyway, you can see them all, the good, the bad and the (mostly) ugly, below!

These first four were done at the start, when I wasn't putting a lot of effort into it, as the semester was rapidly arriving and I wanted to get a two week runway in place. Everything is made with Blender 3D of course, and I had an Eevee only rule to keep render times civilised. Note that I'm only showing one example of each title sheet - every lecture got chopped up into multiple videos, each with a different subtitle. In most cases the background was static, though the out of focus mirror array moved for the 4th lecture, such that the lights converged at the centre as the videos progressed. 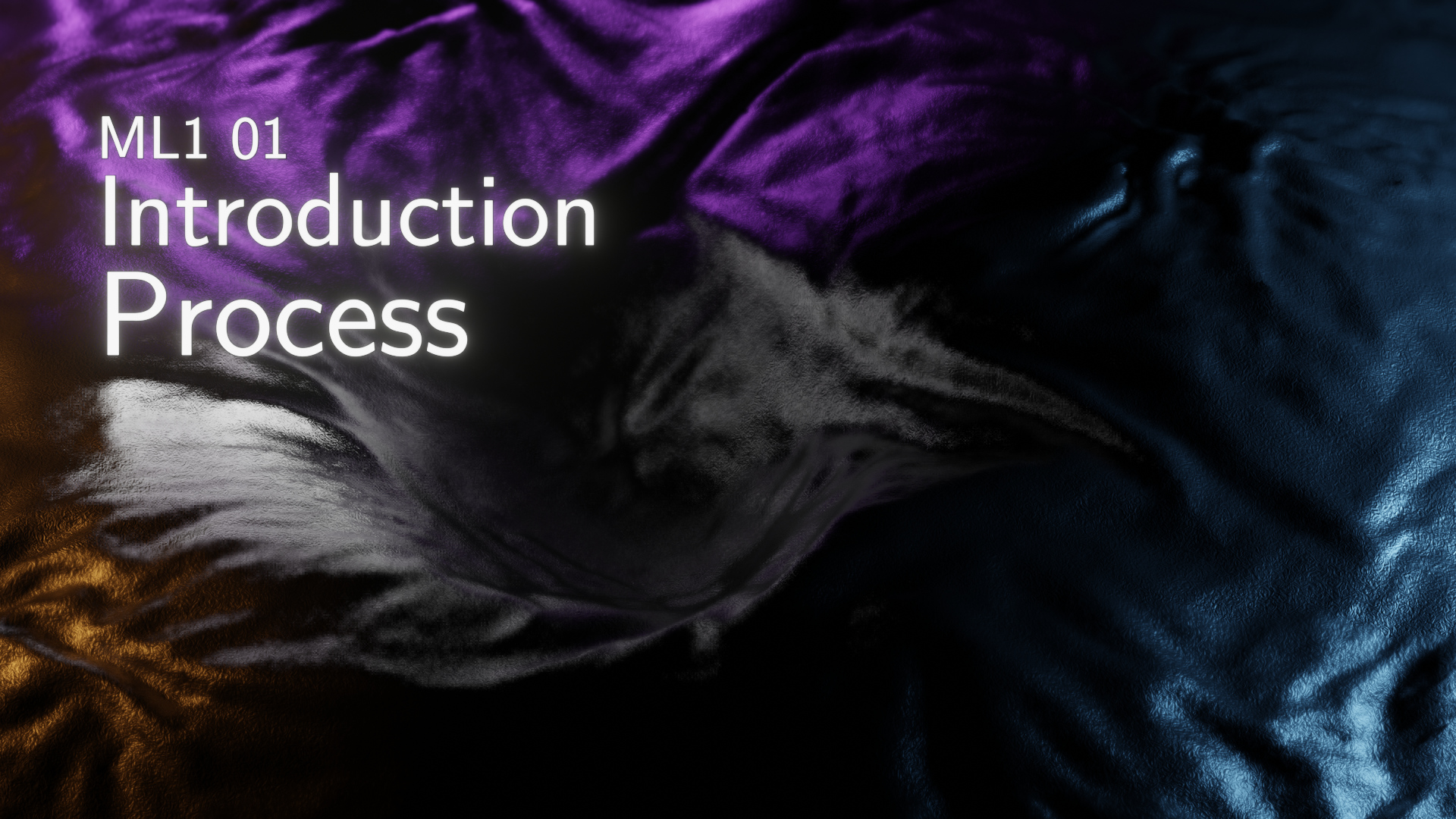 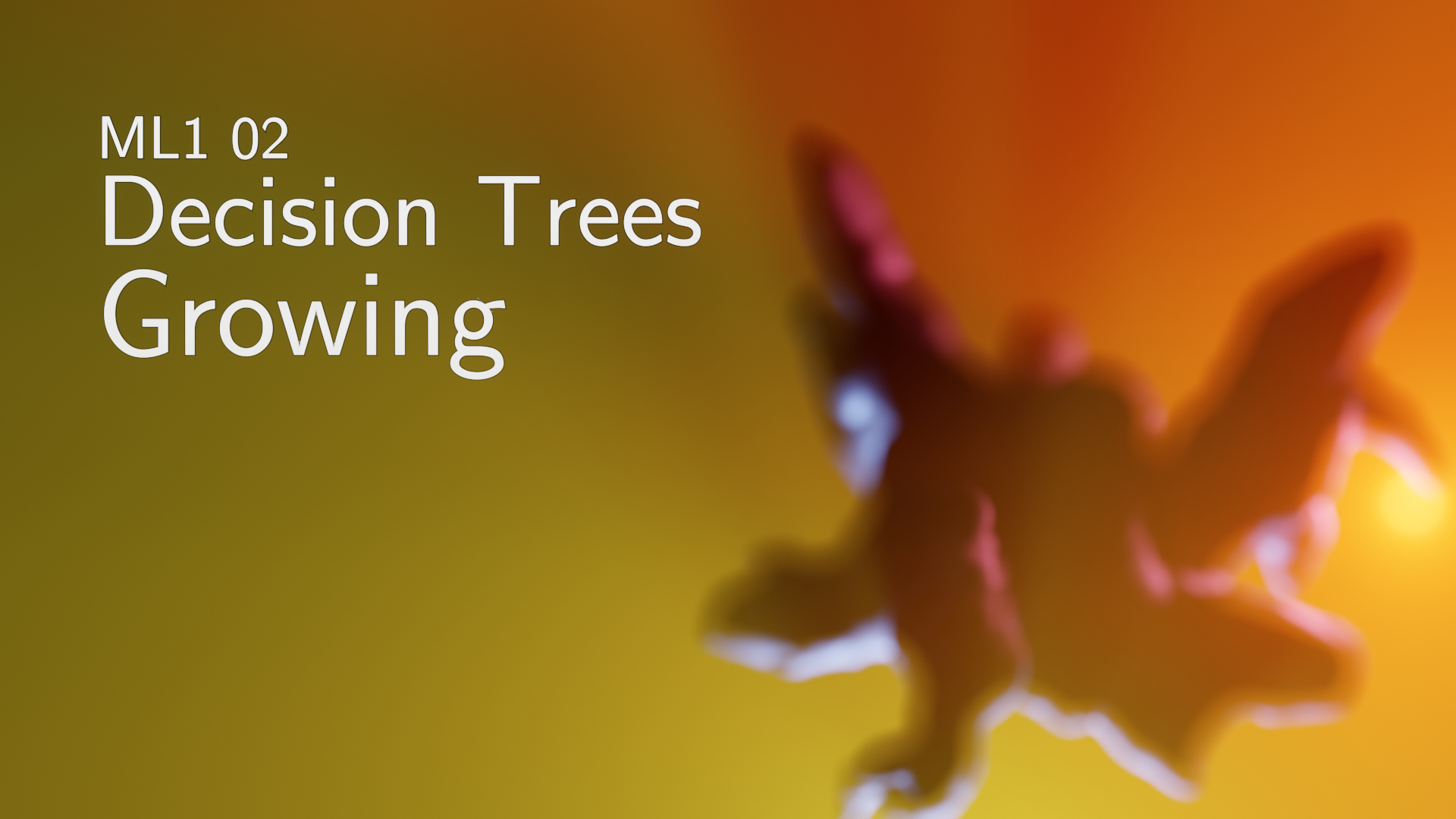 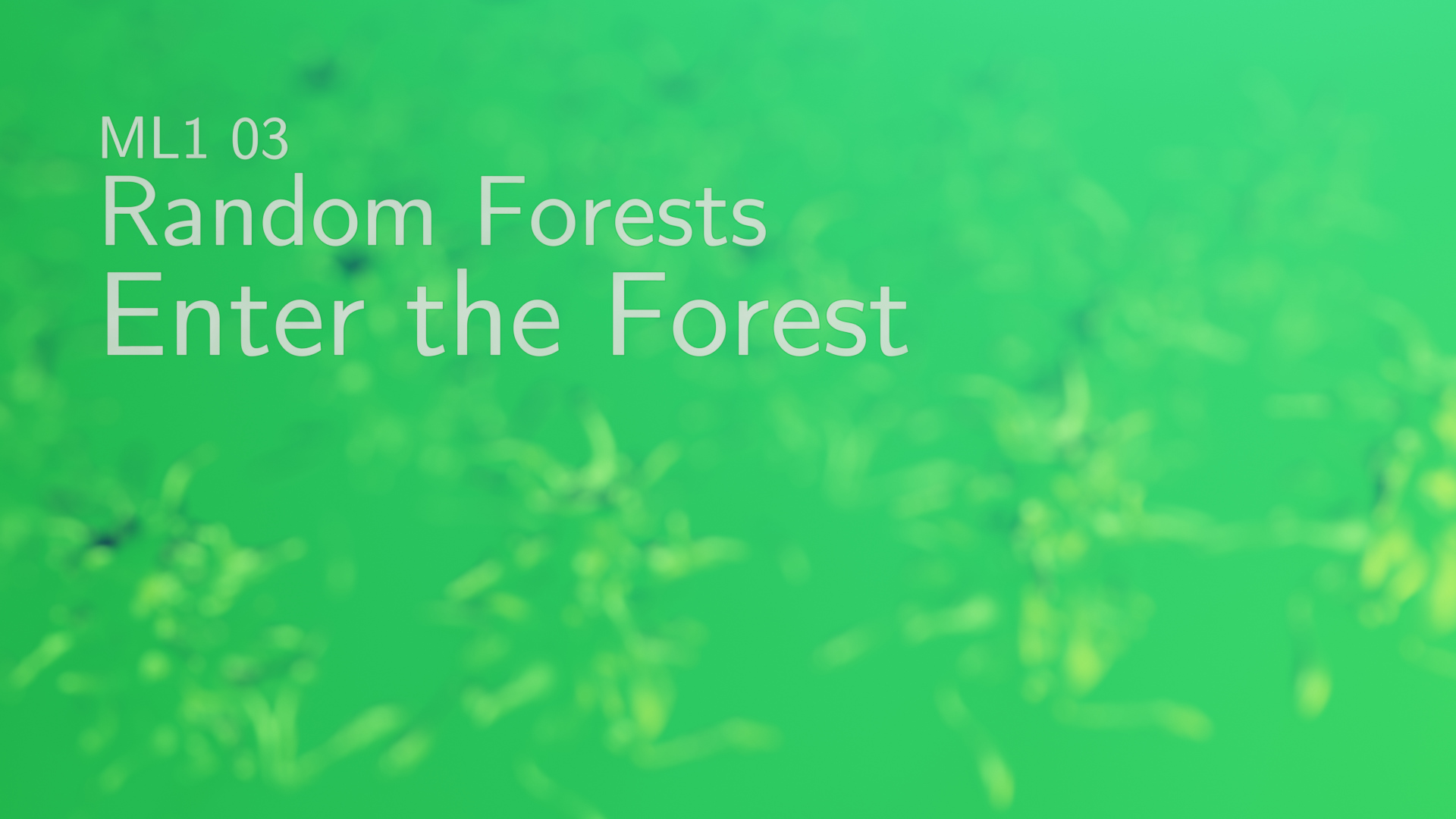 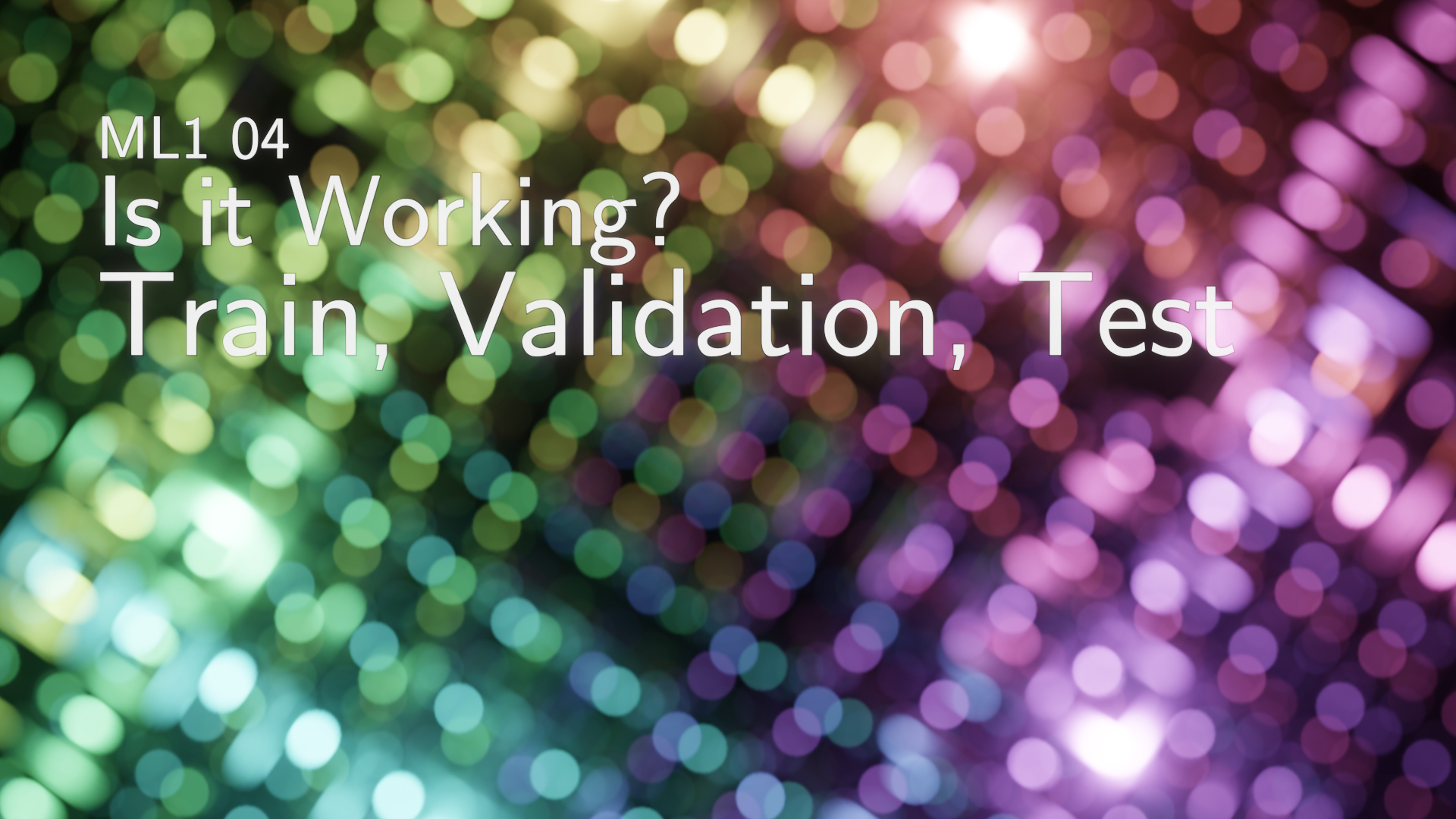 This unit is shared with another lecturer, so I only have to worry about half of the lectures, meaning there are gaps and these two came after a 2 week break for me (2 lectures per week). The first one is pretty simple, but does reference the lecture. Firstly, I knew the last subtitle was going to be "gold standard", so made it sparkly, secondly, note how it gets smoother as you go right? Well, it was a lecture about regularisation, and I wanted to play with Blender new cloth sculpting! The second is my first substantial attempt at something that references the actual lecture however. Curse means pirates, so having one flee for their life was obvious. But then someone else suggested I should put a fractal on the ocean (dimensionality...), hence the pirate is trapped by a Julia fractal. It's not going to end well, but I guess there are worse ways to go... 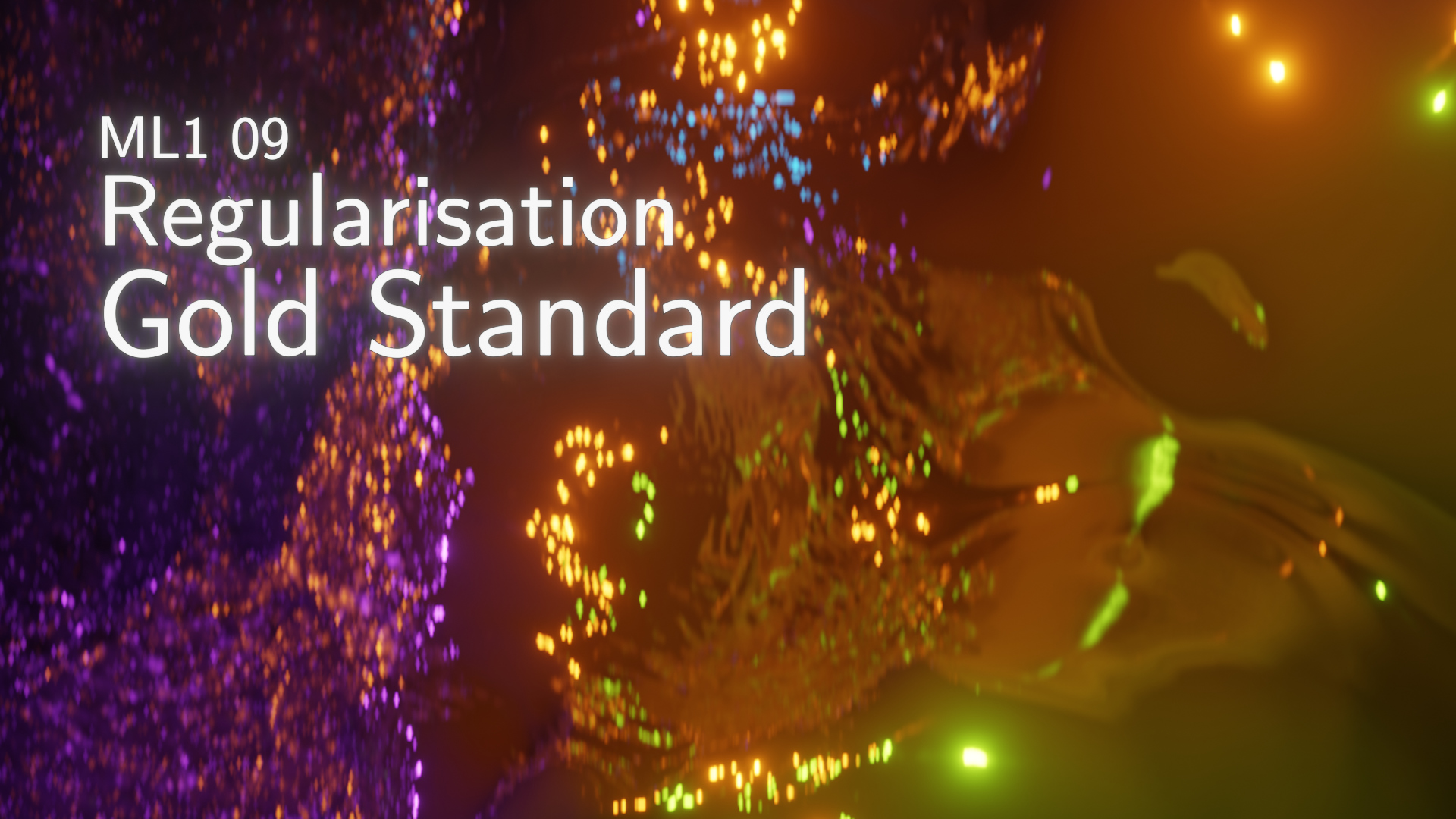 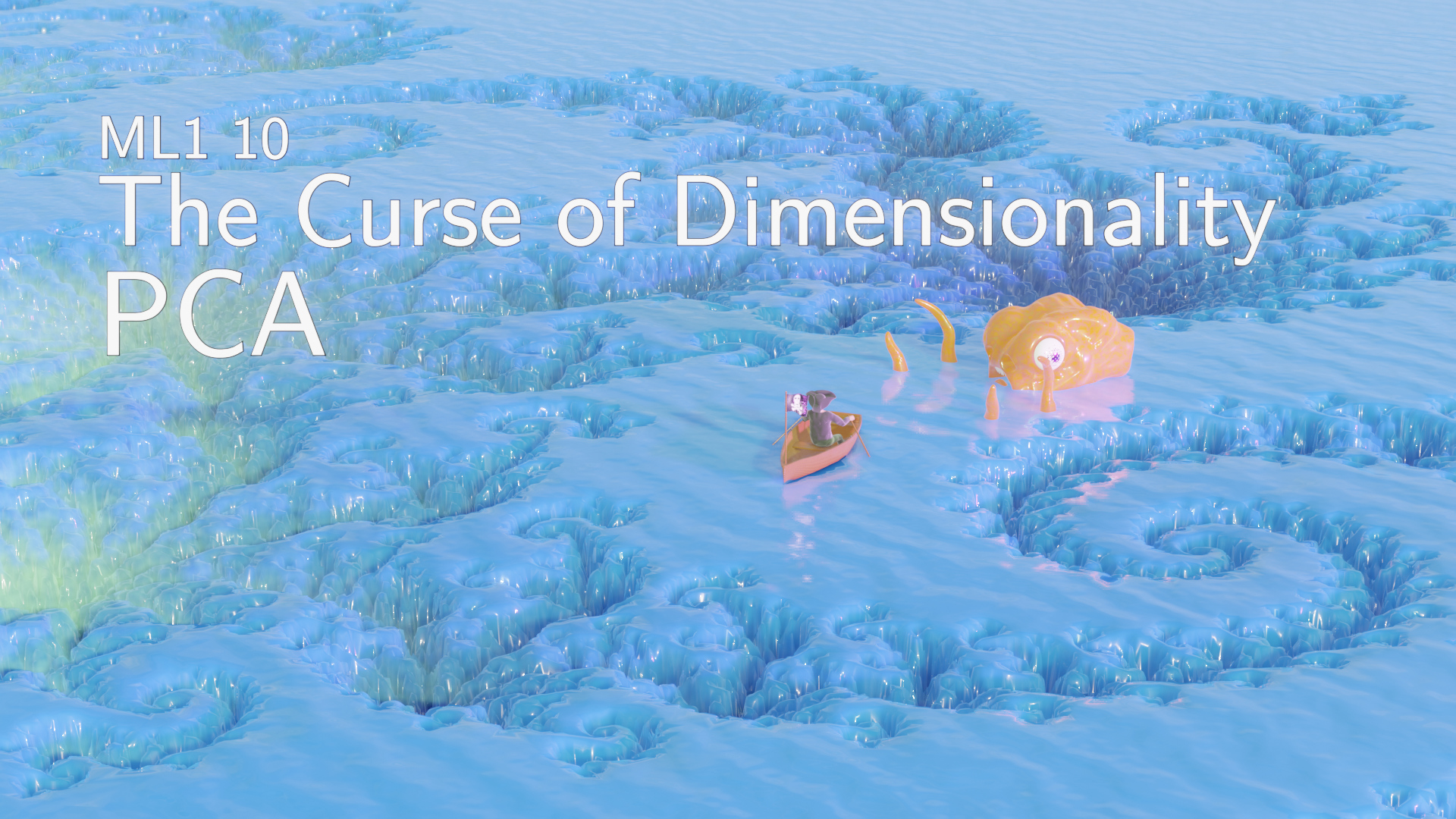 There was a one week break (consolidation week), followed by my last three lectures. The first one didn't work - the idea was that the umbrellas in the rain would look like the nodes of a graphical model, the street would bring a structure to it. Instead it just ended up as a poorly lit disgusting mess; needed a lot more time on this one than I could afford. Second one I cheated. The idea of message passing as a set of antennas on hills worked nicely, and I already had the model of the comms tower from another project, so I pilfered it. Spent about 90% of my time on this one sculpting the hills, so it was super quick! For the final one I had an idea I really liked: The lecture contained a recommender system, so the idea was to have axe robots from Robot Wars with tablets instead of axes, converging on someone with contradictory recommendations. A less than subtle nod to the horror that is the online advertising system. Time was short however, and I rigged the robot without thinking things through, resulting in it being a super slow rig that could only show one screen when multiple were linked and overridden (at least, in Blender 2.90). So when I had a free evening I came back to it, fixed it, and composed a proper image, which I've included below. This is inevitably the most polished thing here, as I treated it as an actual project, rather than just messing around! Rendering it was anything but cheap: I had to killall my web browser to free up enough GPU memory to render that one. 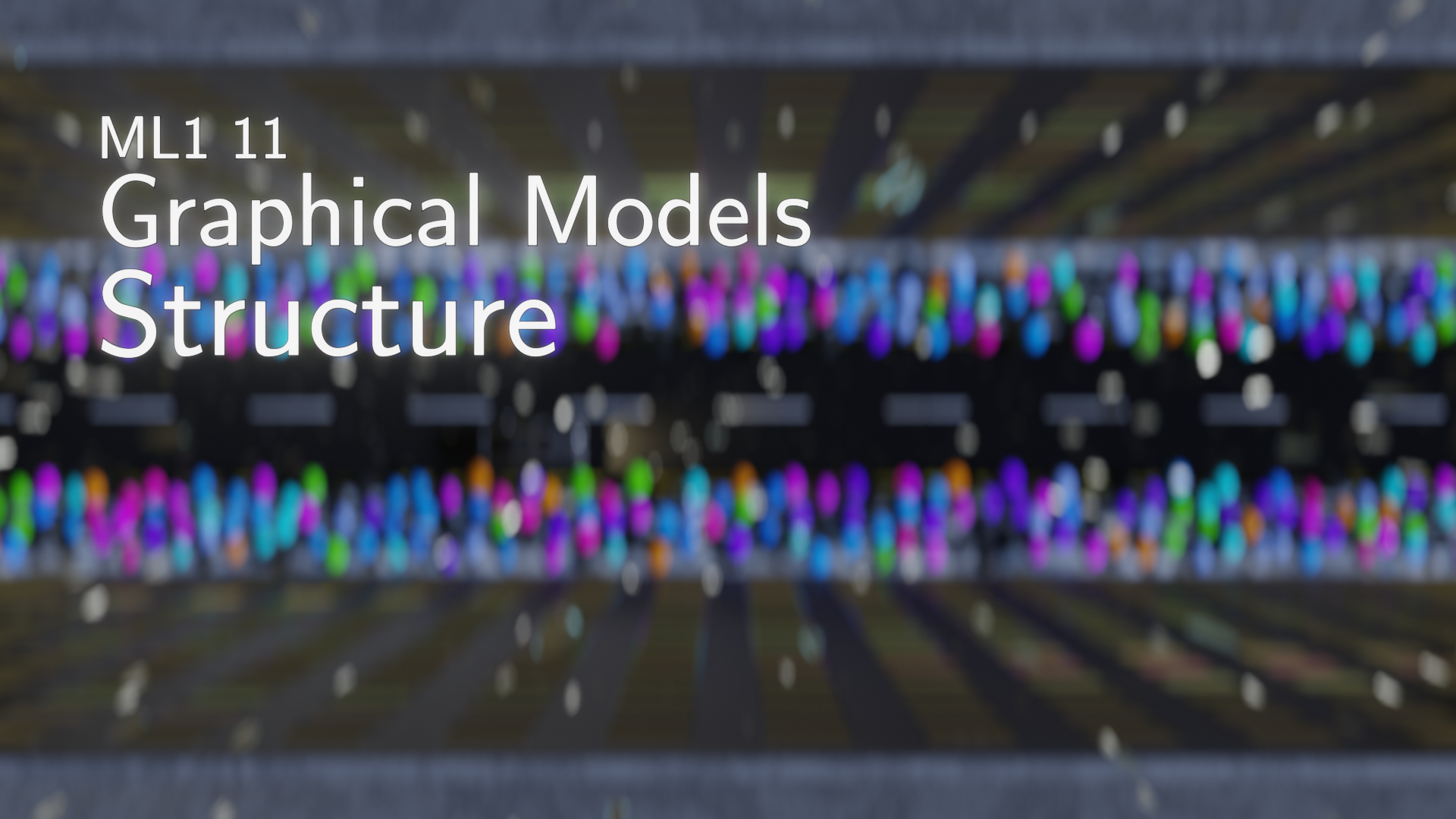 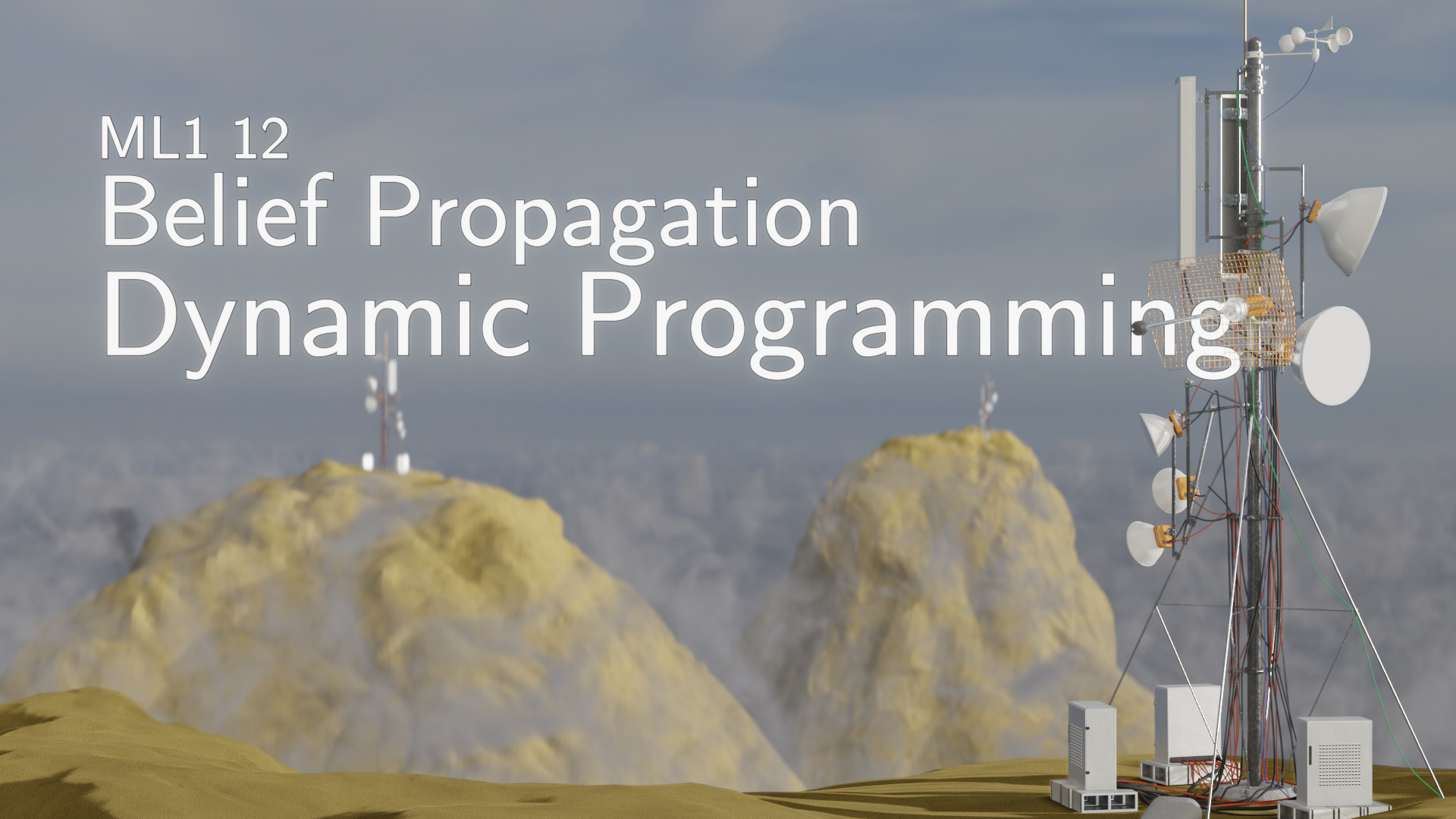 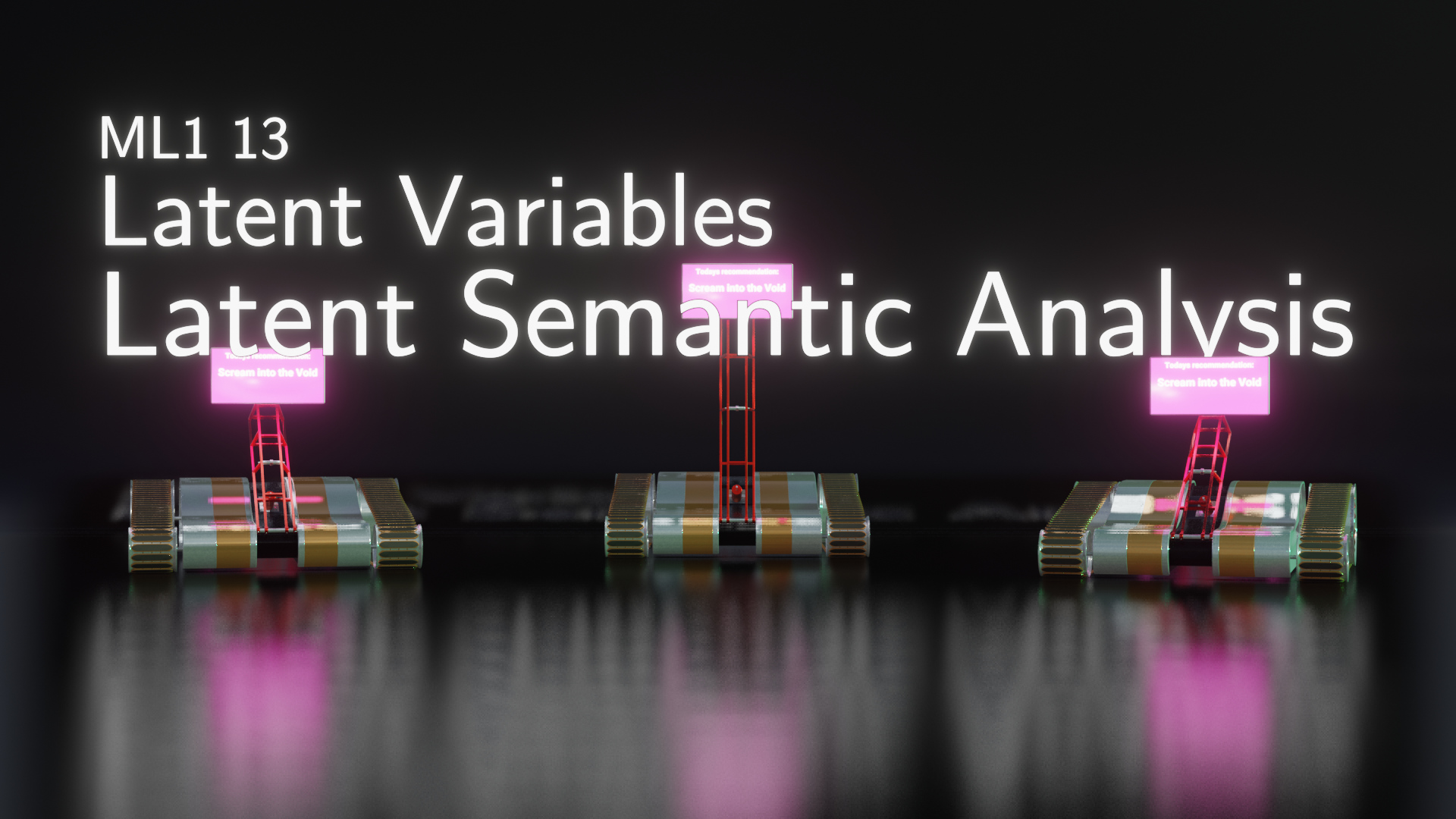 Much like the first four of ML1 I didn't put a lot of effort in at the start of STfDS. This unit is ruthless: Three lectures a week for five weeks, before I hand over, so below is just the first two weeks of titles. As cool as the second one looks, that was entirely an accident when messing around with a hair simulation. The fourth is when I realised I probably shouldn't go entirely abstract, as that would quickly eat too much time, so Rubik's cubes were deployed. Not a clue what is happening with lecture five. The sixth is the first time I referenced the actual content (remember this was occurring in parallel to ML1), with the purplest planet there ever was. 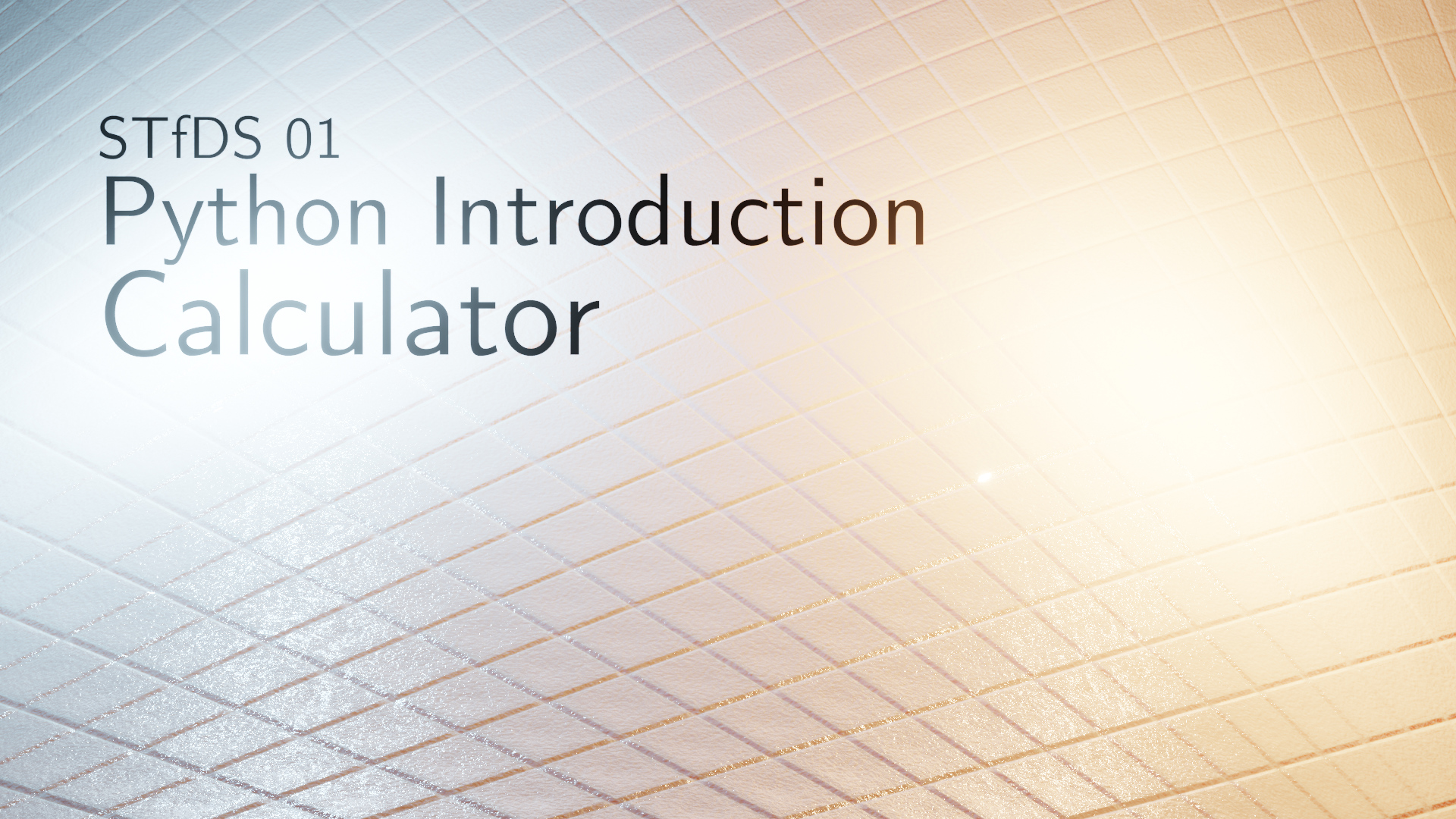 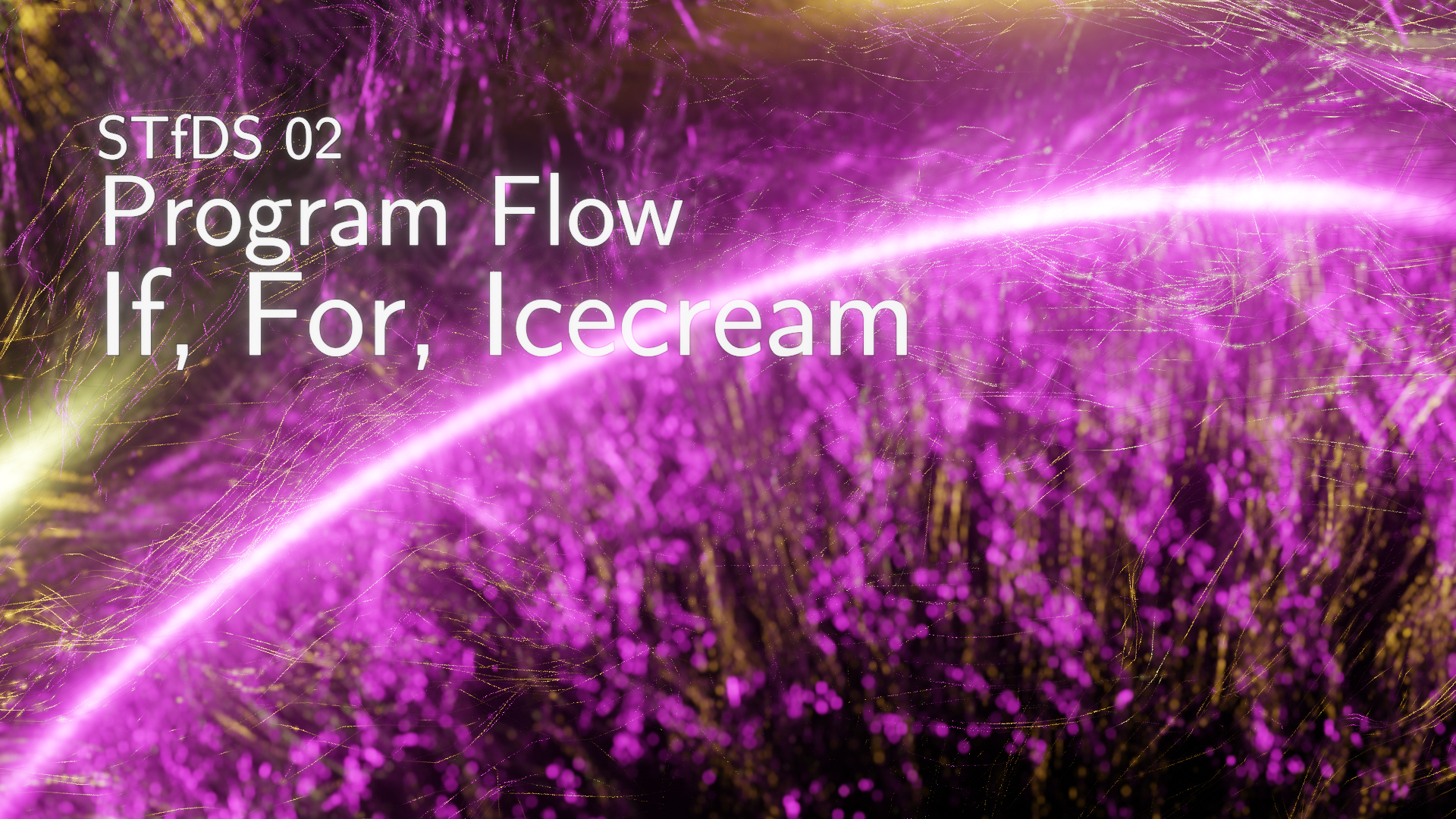 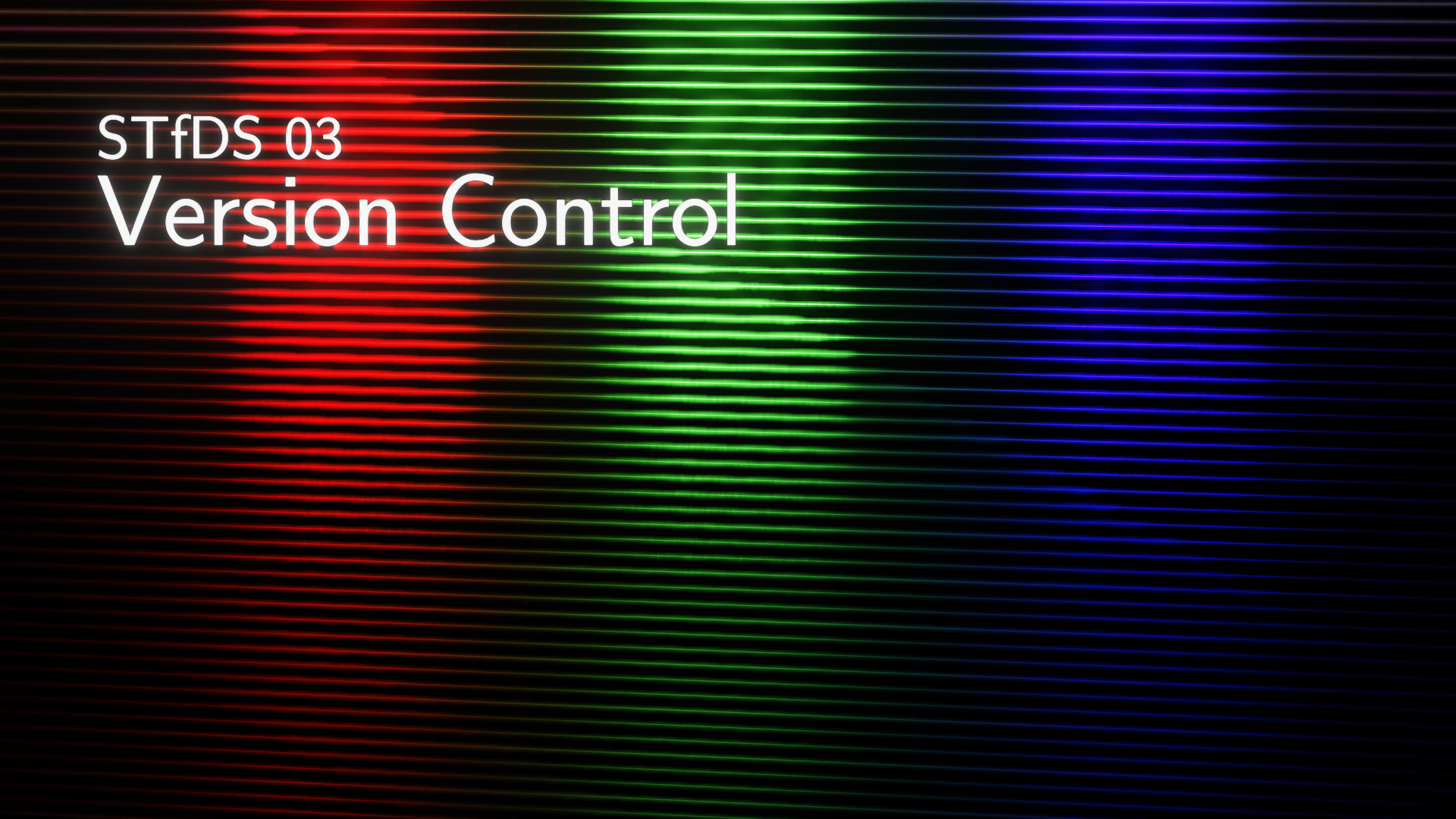 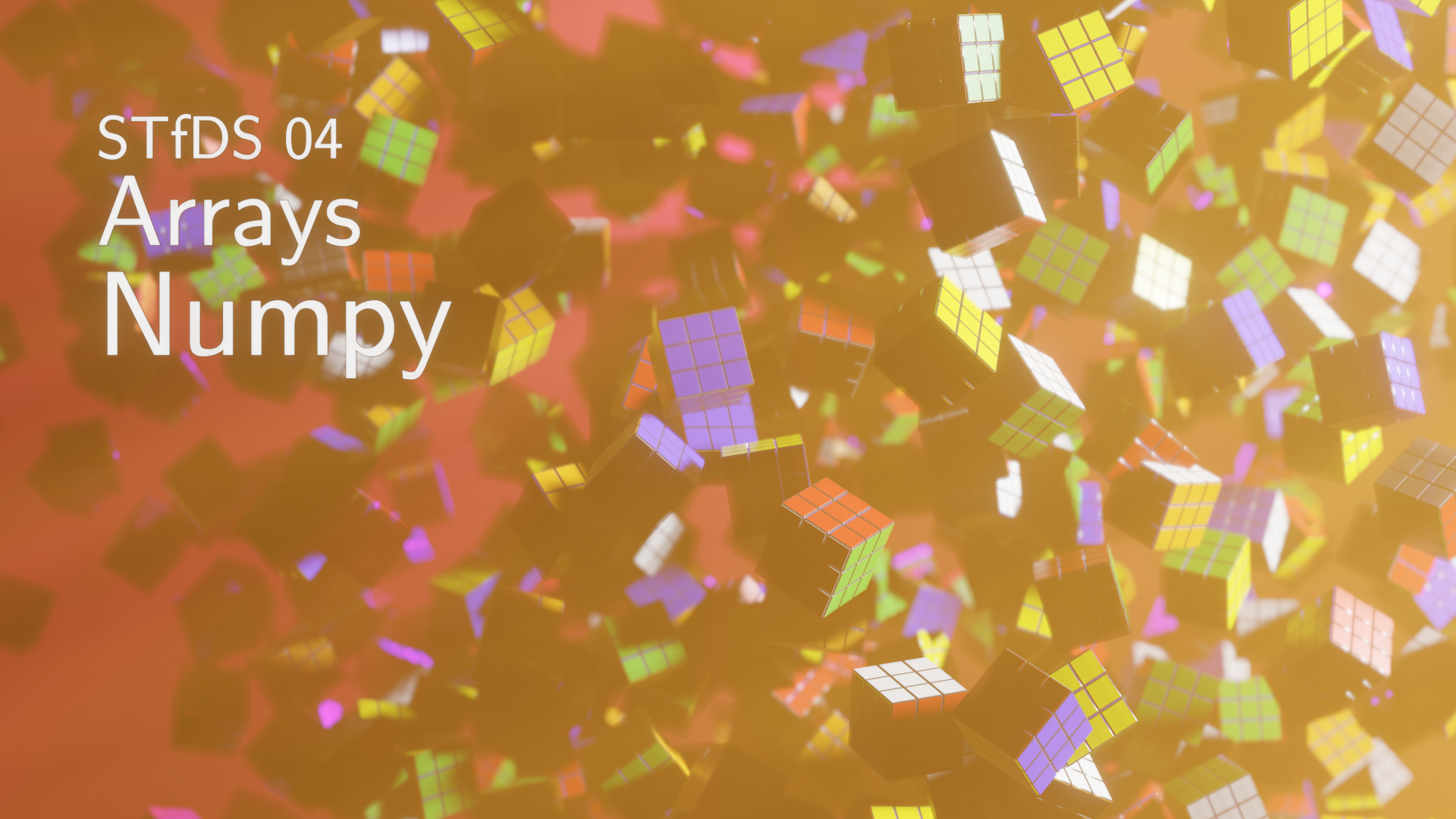 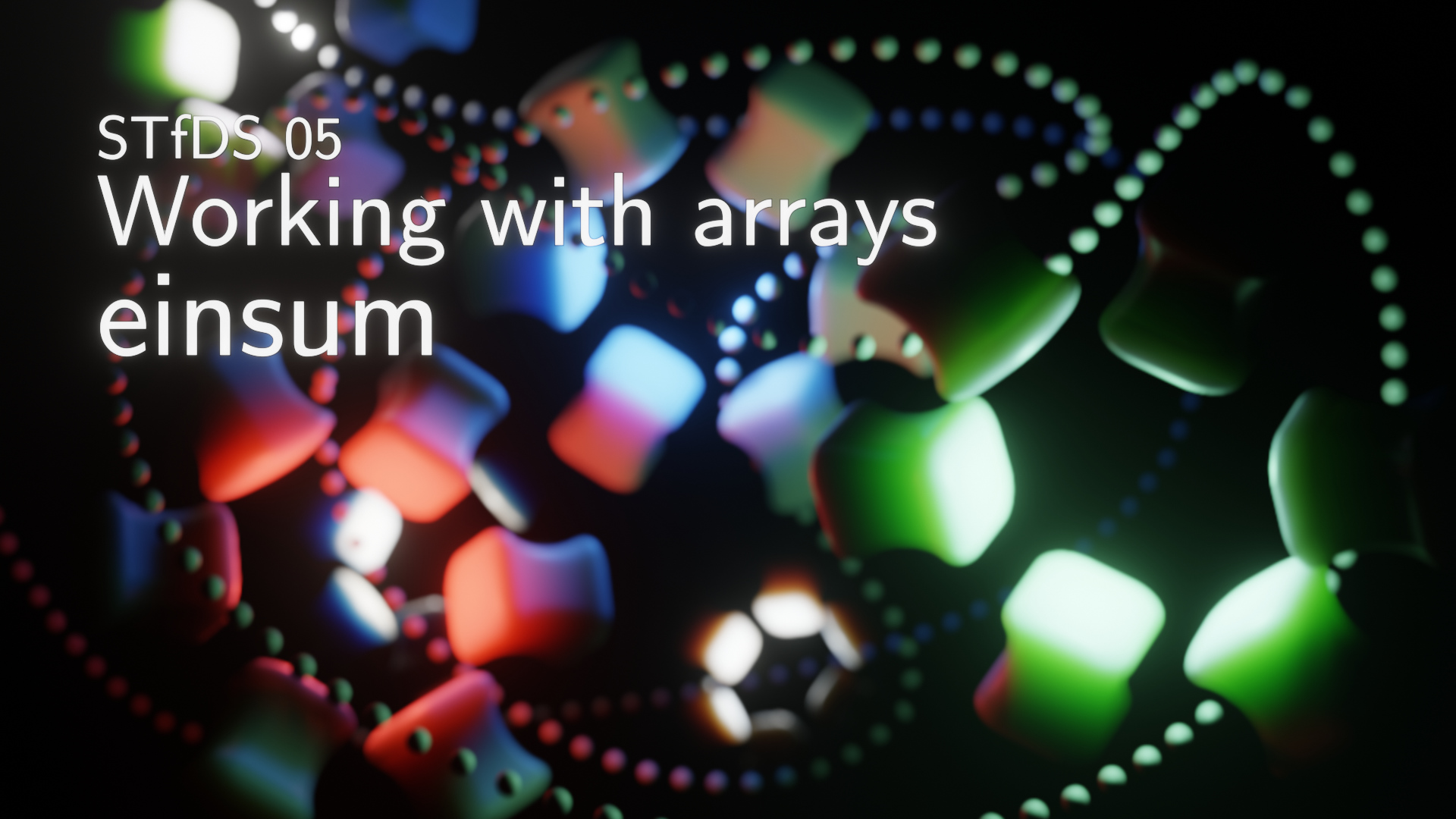 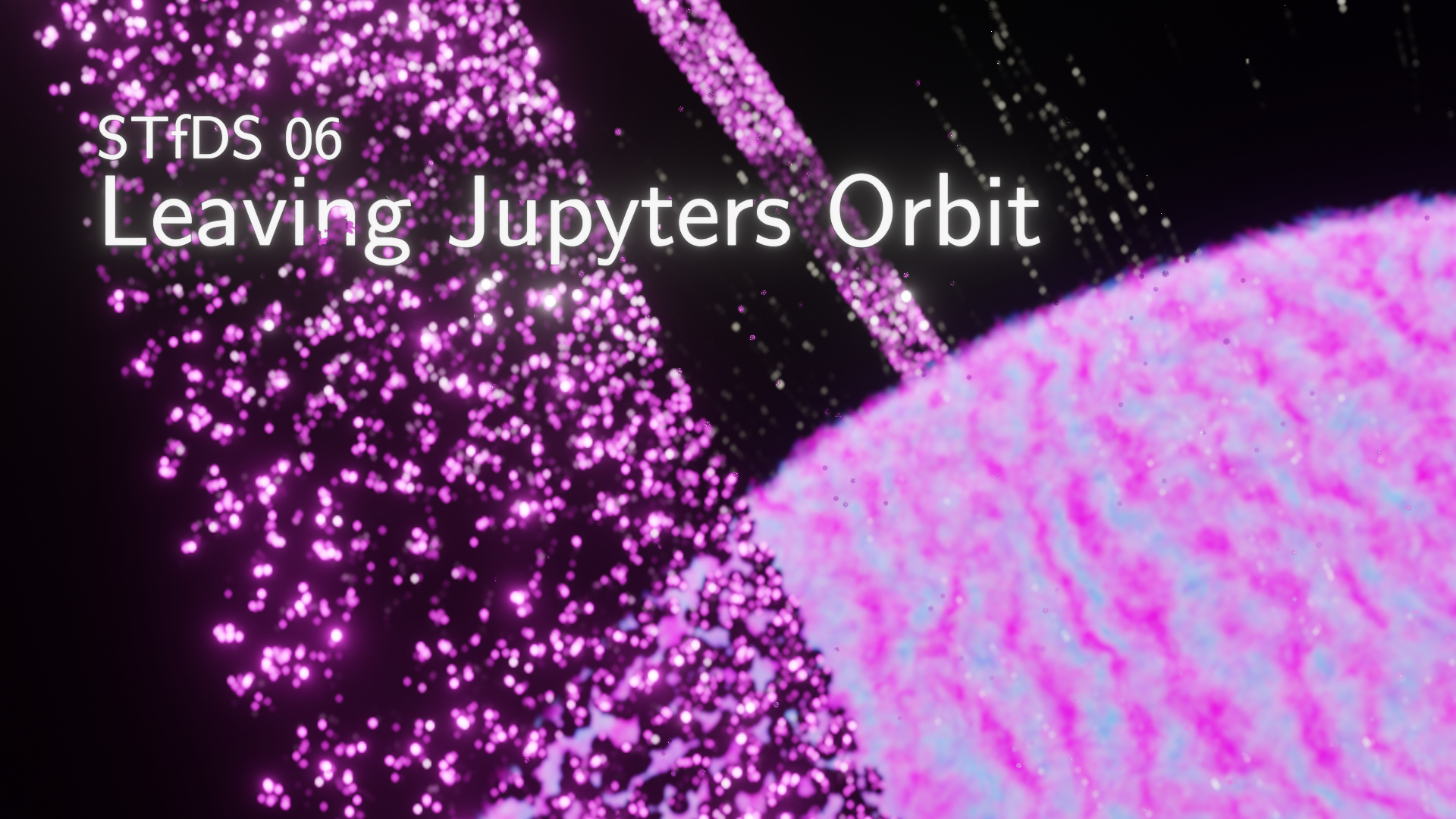 This one is subtle, and I wonder how many of the students got it. When multiple inheritance is demonstrated I needed an example: I merge a Ninja with a Mouse, to create the NinjaMouse class. It ends rather badly for the Cat. And that's the drive for the below image, as what would a ninja mouse be doing if it wasn't keeping their katana in a block of cheese? Lots of such blocks of course, because, well, this is a lecture about objects. The katana was custom made for the image, and I spent rather more time on it than made sense, despite its size. Note how the hand guard looks like whiskers? 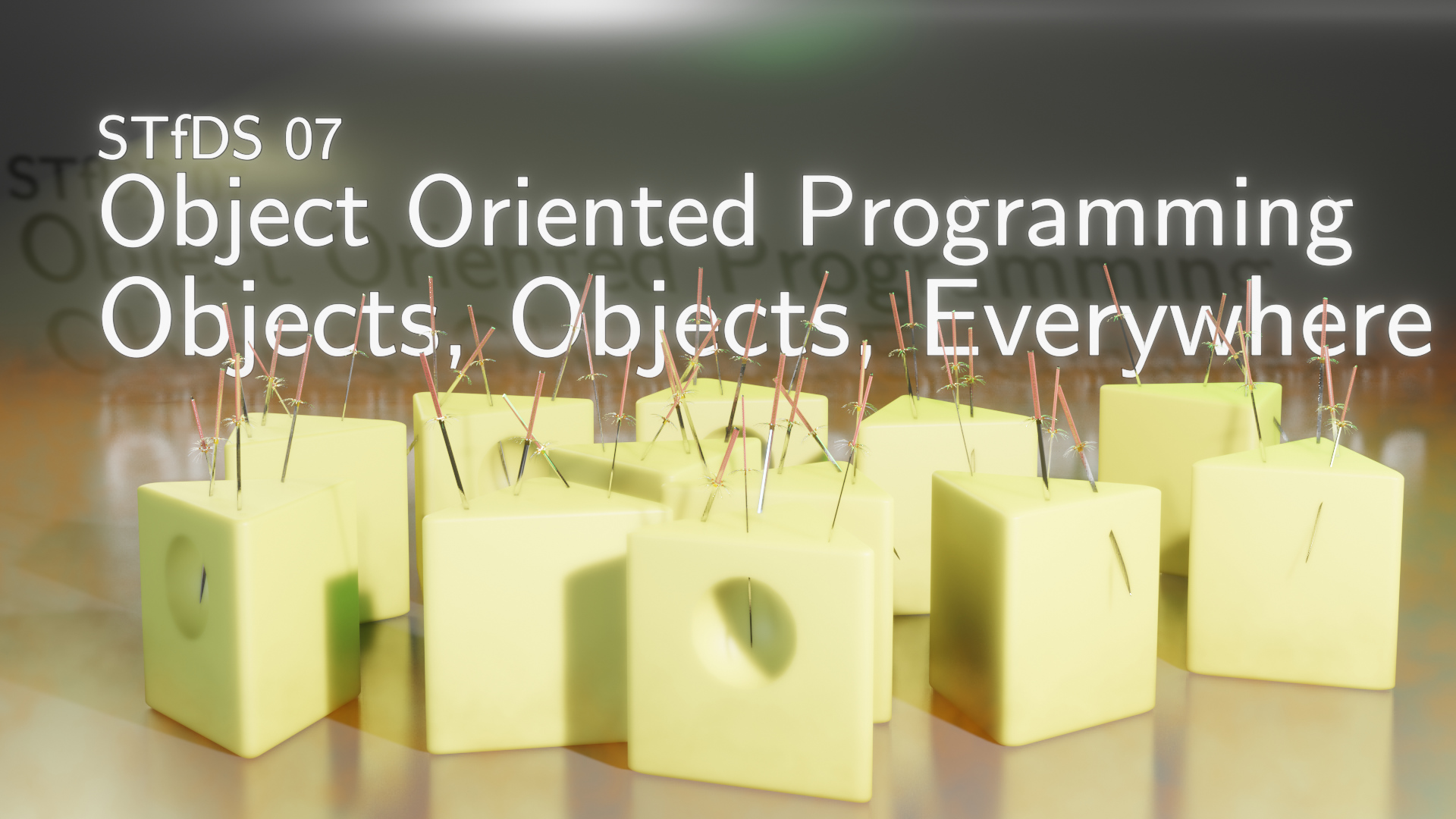 These two are pretty average. Though note how the second one contains a full set of tetrominos, referencing how programmers combine simple parts in ever more complex arrangements. I did have a lot of fun with the procedural generation of books for the library: Each shelf has a single cube on it... and a fairly complex shader! 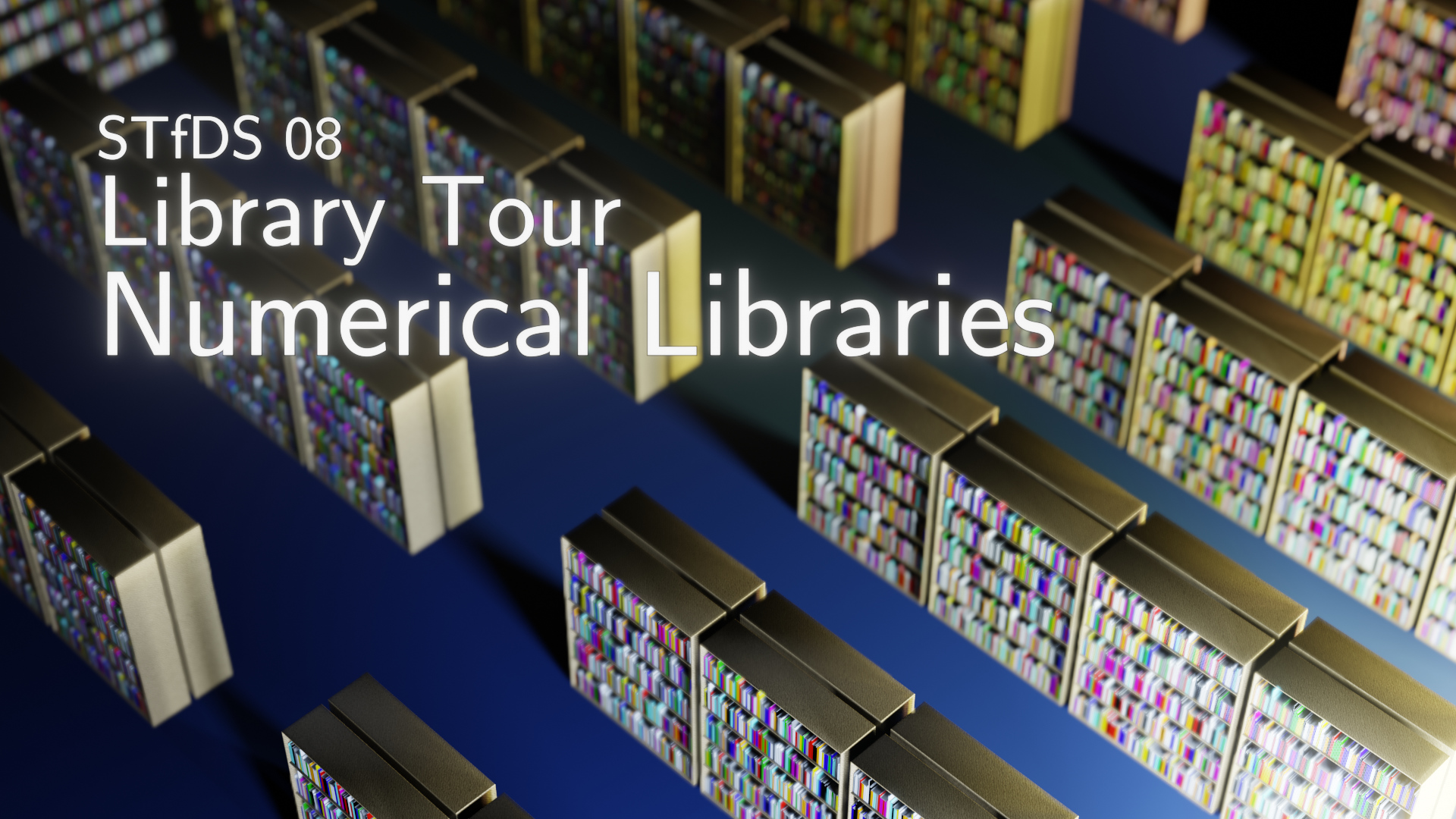 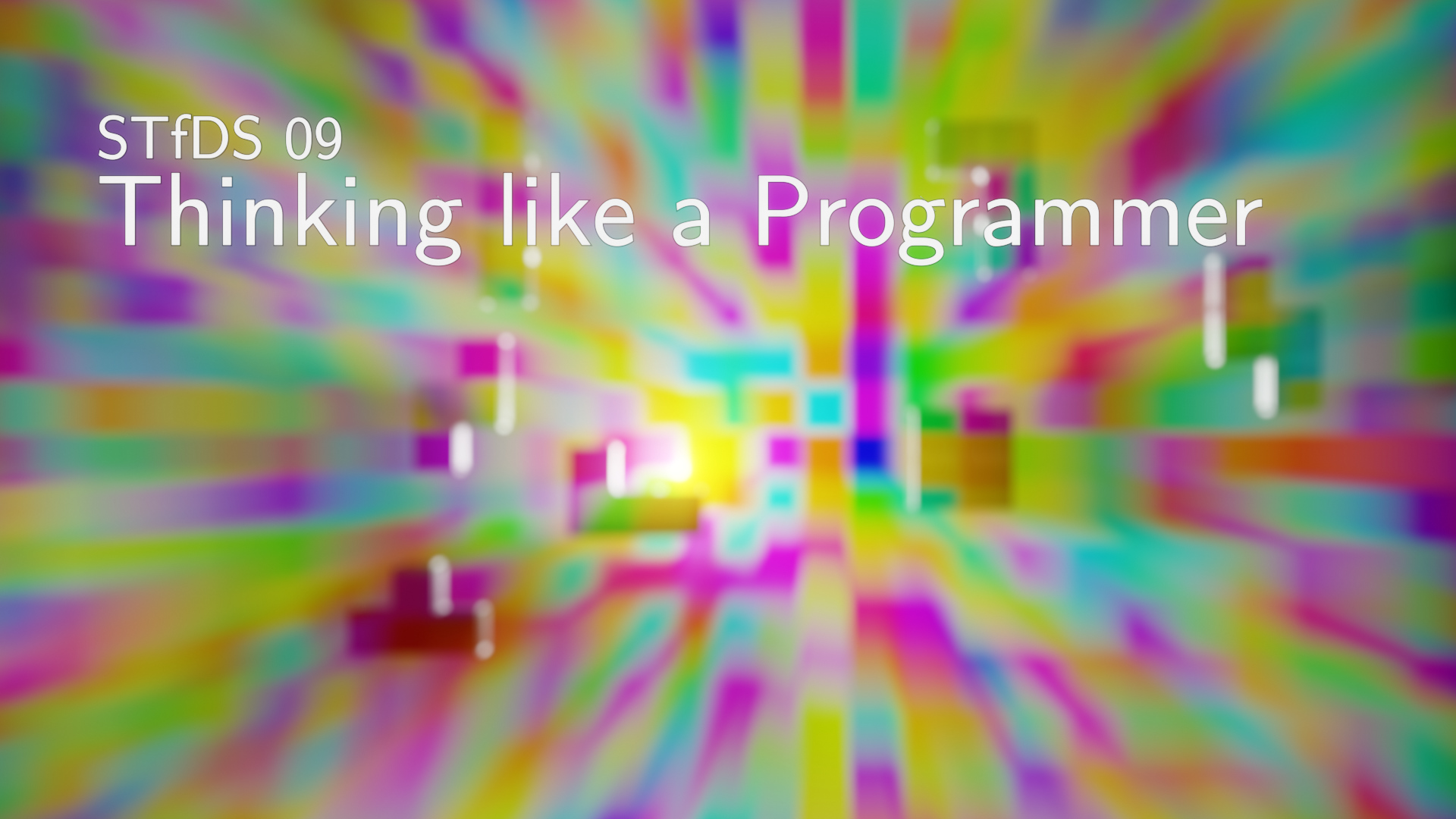 How could my lecture on bugs be anything else? One of the few I animated - the escaped bug gets closer with every video. OK, this one took far too long, but I just had the idea of a NaN being an explosion (most of the lecture is about handling floating point maths) and had to make it real. Rather garish really, but I think the concept makes up for that. In hindsight, should have dialled the neon up to 11. 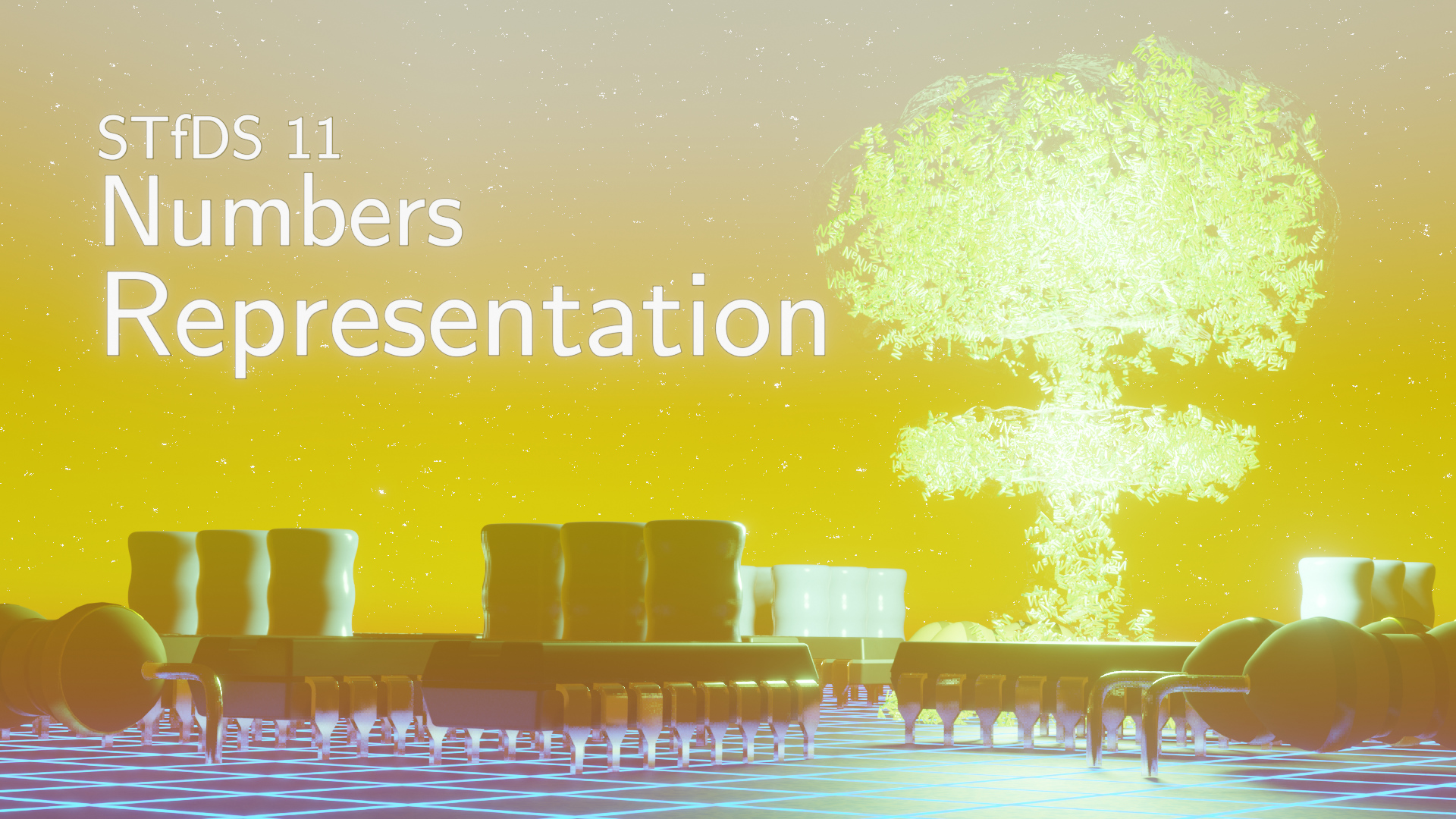 It's hard to escape using a hyperspace jump when presenting a lecture about internet technologies. But at least the space ship has cats ears. Whole face in fact, as I got a little carried away. 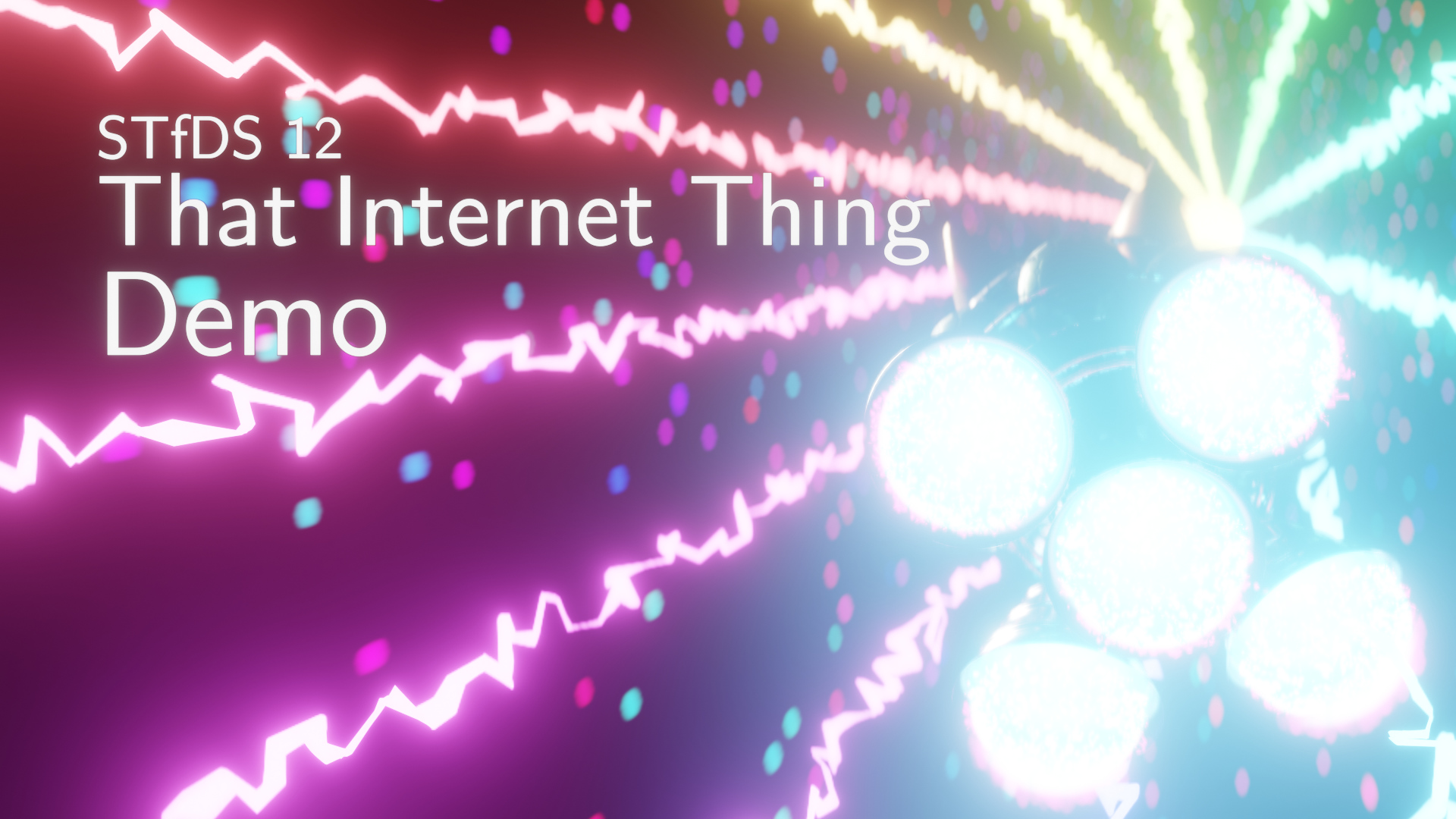 Probably my second favorite. I mean, optimisation is about making things faster, and it's a safe bet any kid on that trike is going to go plenty fast! Control system might have some issues however. Classic case of me just getting into the zone and keeping going until I had it all. 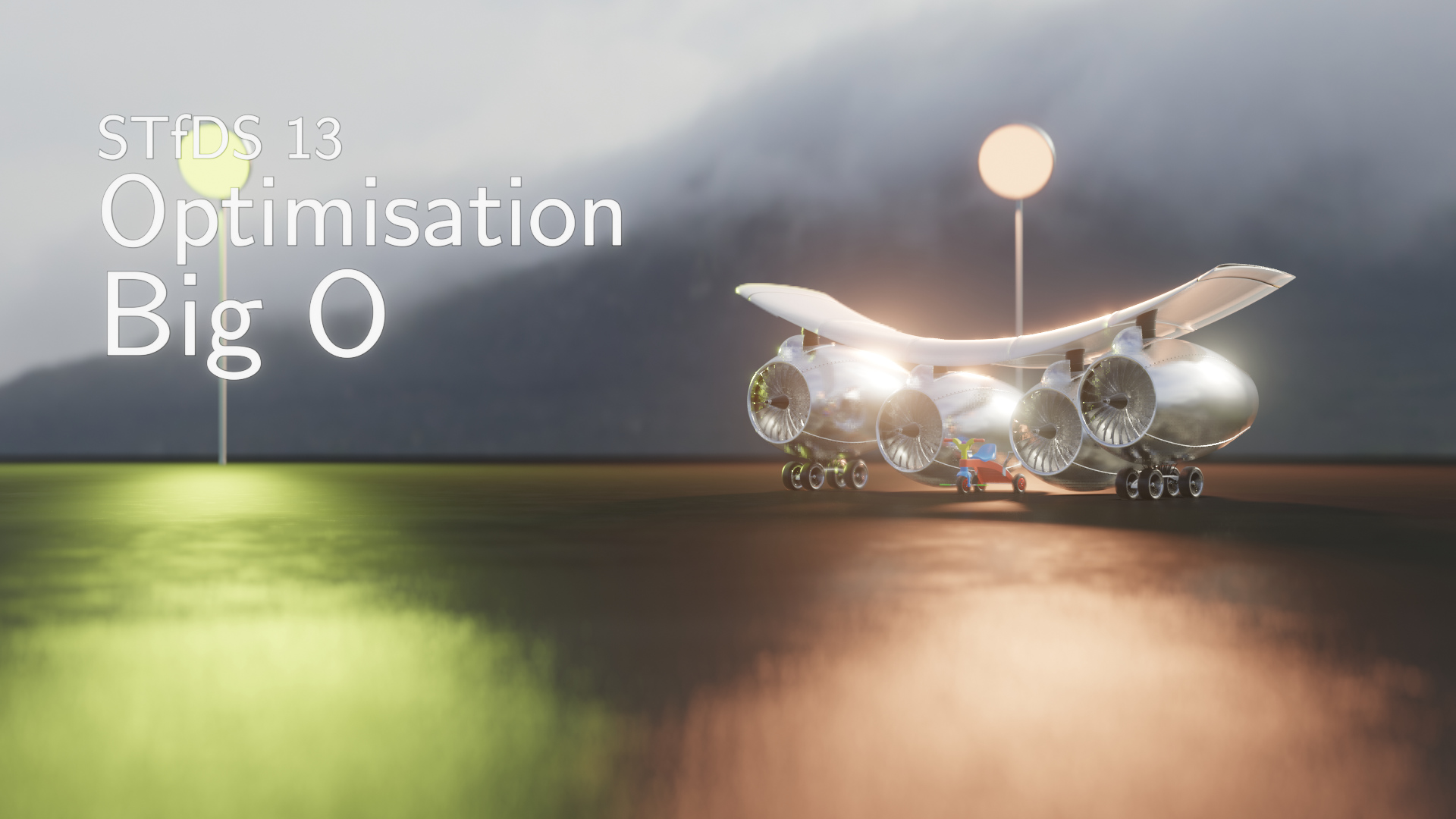 I'ld very much run out of steam with these last two - week they were released I had five lecture to prepare, and these were the last. An island in the ocean is straight forward enough, and very loosely references the idea of leaving Python, to travel to shores anew. Server farm was an exercise in hard surface modelling then excessive instancing - it's the case we have our GPU nodes in, though unfortunately not quite as many! 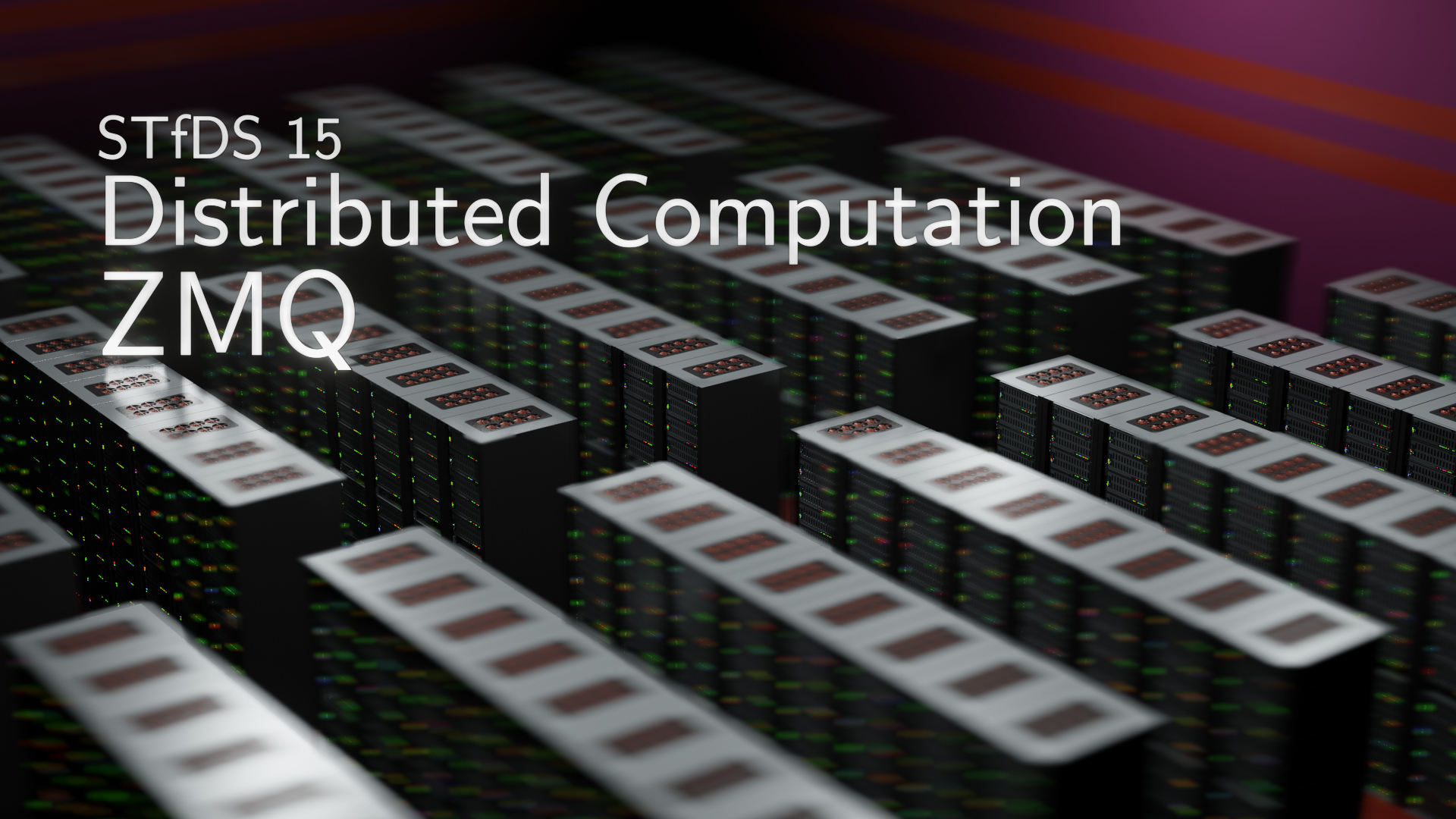